Annual celebration held on May 5
"5th of May" redirects here. For the date, see May 5.
Not to be confused with Mexican Independence Day, which occurs on September 16.

Cinco de Mayo (pronounced [ˈsiŋko̞ ðe̞ ˈma̠ʝo̞] in Mexico, Spanish for "Fifth of May") is a yearly celebration held on May 5, which commemorates the anniversary of Mexico's victory over the Second French Empire at the Battle of Puebla in 1862,[1][2] led by General Ignacio Zaragoza. The victory of a smaller, poorly equipped Mexican force against the larger and better-armed French army was a morale boost for the Mexicans. Zaragoza died months after the battle from an illness, and a larger French force ultimately defeated the Mexican army at the Second Battle of Puebla and occupied Mexico City.

More popular in the United States than Mexico,[3][4] Cinco de Mayo has become associated with the celebration of Mexican-American culture.[5][6][7] Celebrations began in California, where they have been observed annually since 1863. The day gained nationwide popularity beyond those of Mexican-American heritage in the 1980s due to advertising campaigns by beer, wine, and tequila companies; today, Cinco de Mayo generates beer sales on par with the Super Bowl.[8] In Mexico, the commemoration of the battle continues to be mostly ceremonial, such as through military parades or battle reenactments. The city of Puebla marks the event with various festivals and reenactments of the battle.

Cinco de Mayo is sometimes mistaken for Mexico's Independence Day—the most important national holiday in Mexico—which is celebrated on September 16, commemorating the Cry of Dolores in 1810, which initiated the war of Mexican independence from Spain.[1][9] Cinco de Mayo has been referenced and featured in entertainment media, and has become an increasingly global celebration of Mexican culture, cuisine, and heritage.

Events leading to the Battle of Puebla 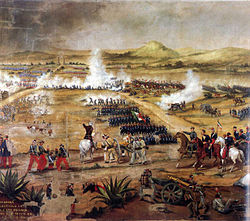 Anonymous painting depicting the Battle of Puebla in 1862, located at the Museo Nacional de las Intervenciones.

Cinco de Mayo has its roots in the Second French intervention in Mexico, which took place in the aftermath of the 1846–48 Mexican–American War and the 1858–61 Reform War. The Reform War was a civil war that pitted Liberals (who believed in separation of church and state and freedom of religion) against Conservatives (who favored a tight bond between the Catholic Church and the Mexican state).[10] These wars nearly bankrupted the Mexican Treasury. On July 17, 1861, Mexican President Benito Juárez issued a moratorium in which all foreign debt payments would be suspended for two years.[6][11] In response, France, Britain and Spain held a convention in London and joined in alliance to send naval forces to Veracruz to demand reimbursement. France, at the time ruled by Napoleon III, decided to use the opportunity to establish an empire in Mexico that would favor French interests, the Second Mexican Empire. Whereupon Britain and Spain negotiated with Mexico and peacefully withdrew. The empire was part of an envisioned "Latin America" (term used to imply cultural kinship of the region with France) that would rebuild French influence in the American continent and exclude Anglophone American territories.[citation needed]

Late in 1861, a well-armed French fleet attacked Veracruz, landing a large French force and driving President Juárez and his government into retreat.[12] Moving on from Veracruz towards Mexico City, the French army encountered heavy resistance from the Mexicans close to Puebla, at the Mexican forts of Loreto and Guadalupe.[13] The French army of 6,500–8,000[14][15][13] attacked the poorly equipped Mexican army of 4,000.[13][note 1] On May 5, 1862,[16] the Mexicans decisively defeated the French army.[17][18][19] The victory represented a significant morale boost to the Mexican army and the Mexican people at large[20][21] and helped establish a sense of national unity and patriotism.[22]

Events after the battle 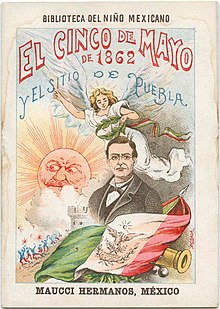 "May 5, 1862 and the siege of Puebla", a 1901 image from the Biblioteca del Niño Mexicano, a series of booklets for children detailing the history of Mexico.

The Mexican victory, however, was short-lived. A year later, with 30,000 troops, the French were able to defeat the Mexican army, capture Mexico City, and install Emperor Maximilian I as ruler of Mexico.[13] The French victory was itself short-lived, lasting only three years, from 1864 to 1867.[13] By 1865, "with the American Civil War now over, the U.S. began to provide more political and military assistance to Mexico to expel the French".[13] Upon the conclusion of the American Civil War, Napoleon III, facing a persistent Mexican guerilla resistance, the threat of war with Prussia, and "the prospect of a serious scrap with the United States", retreated from Mexico starting in 1866.[23] The Mexicans recaptured Mexico City, and Maximilian I was apprehended and executed, along with his Mexican generals Miguel Miramón and Tomás Mejía Camacho in Cerro de las Campanas, Querétaro.[11][13] "On June 5, 1867, Benito Juárez entered Mexico City where he installed a new government organizing his administration."[11]

The Battle of Puebla was significant, both nationally and internationally, for several reasons. First, "This battle was significant in that the 4,000 Mexican soldiers were greatly outnumbered by the well-equipped French army of 8,000 that had not been defeated for almost 50 years."[24][25][note 2] Second, since the overall failed French intervention, some have argued that no country in the Americas has subsequently been invaded by any other military force from Europe.[26][note 3] Historian Justo Sierra has suggested in his Political Evolution of the Mexican People that, had Mexico not defeated the French in Puebla on May 5, 1862, France would have gone to the aid of the Confederate States of America in the American Civil War and the United States' destiny could have been different.[27][28]

History of the holiday 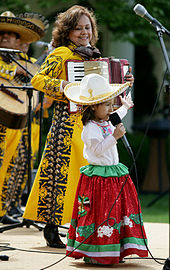 According to a paper published by the UCLA Center for the Study of Latino Health and Culture about the origin of the observance of Cinco de Mayo in the United States, the modern American focus on that day first started in California in 1863 in response to the resistance to French rule in Mexico.[29] "Far up in the gold country town of Columbia (now Columbia State Park) Mexican miners were so overjoyed at the news that they spontaneously fired off rifle shots and fireworks, sang patriotic songs and made impromptu speeches."[30] 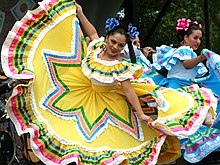 A 2007 UCLA Newsroom article notes that "the holiday, which has been celebrated in California continuously since 1863, is virtually ignored in Mexico."[29] Time magazine reports that "Cinco de Mayo started to come into vogue in 1940s America during the rise of the Chicano Movement."[21] The holiday crossed over from California into the rest of the United States in the 1950s and 1960s but did not gain popularity until the 1980s when marketers, especially beer companies, capitalized on the celebratory nature of the day and began to promote it.[31][32] It grew in popularity and evolved into a celebration of Mexican culture and heritage, first in areas with large Mexican-American populations, like Los Angeles, Chicago, Houston, New York, followed by Cleveland, Boston, Indianapolis, Raleigh, Dallas, San Antonio, Washington, D.C., Atlanta, Miami, Orlando, Denver, Phoenix, Philadelphia, Tucson, San Francisco, San Jose, and San Diego.[33] 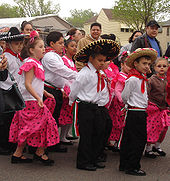 In a 1998 study in the Journal of American Culture it was reported that there were more than 120 official US celebrations of Cinco de Mayo in 21 different states. An update in 2006 found that the number of official Cinco de Mayo events was 150 or more, according to José Alamillo, a professor of ethnic studies at Washington State University in Pullman, who has studied the cultural impact of Cinco de Mayo north of the border.[34] Los Angeles' Fiesta Broadway has been billed as the largest Cinco de Mayo celebration in the world, which it most certainly was at its peak in the 1990s when it attracted crowds of 500,000 or more. In recent years attendance has seen a dramatic decrease.[35][36]

On June 7, 2005, the United States Congress issued a concurrent resolution calling on the President of the United States to issue a proclamation calling upon the people of the United States to observe Cinco de Mayo with appropriate ceremonies and activities.[37] To celebrate, many display Cinco de Mayo banners while school districts hold special events to educate students about its historical significance. Special events and celebrations highlight Mexican culture, especially in its music and regional dancing. Examples include baile folklórico and mariachi demonstrations held annually at the Plaza del Pueblo de Los Ángeles, near Olvera Street. Commercial interests in the United States have capitalized on the celebration, advertising Mexican products and services, with an emphasis on alcoholic beverages,[38][39] foods, and music.[40][41] According to Nielsen, in 2013 more than $600 million worth of beer was purchased in the United States for Cinco de Mayo, more than for the Super Bowl or St. Patrick's Day.[8]

The former Forts of Guadalupe and Loreto now house a museum.

Today, the commemoration of the battle is not observed as a national holiday in Mexico (i.e. not a statutory holiday).[47] However, all public schools are closed nationwide in Mexico on May 5.[48][49] The day is an official holiday in the State of Puebla, where the Battle took place, and also a full holiday (no work) in the neighboring State of Veracruz.[50][51]

In Puebla, historical reenactments, parades, and meals take place to commemorate the battle. Parade participants dress as French and Mexican soldiers to reenact the battle.[52] Every year the city also hosts the Festival Internacional de Puebla, which gathers national and international artists, traditional musicians and dancers.[52] As well as the Festival Internacional del Mole, with an emphasis on the city's iconic mole poblano.[52]

In Mexico City, military commemoration is occasionally held at the Campo Marte.[53] A street, Avenida Cinco de Mayo [es], in the Historic Center of Mexico City was named after the battle in 1862 by Benito Juárez.

Events tied to Cinco de Mayo also occur outside Mexico and the United States. As in the United States, celebrations elsewhere also emphasize Mexican cuisine, culture and music. For example, some Canadian pubs play Mexican music and serve Mexican food and drink,[54] and a sky-diving club near Vancouver holds a Cinco de Mayo skydiving event.[55] In the Cayman Islands, in the Caribbean, there is an annual Cinco de Mayo air guitar competition,[56] and at Montego Bay, Jamaica, there is a Cinco de Mayo celebration.[57] The city of Brisbane, Queensland, Australia, holds an annual Mexican Festival[58] to honor the day, and celebrations are held in London[59] and New Zealand.[60] Other celebrations of the day can also be found in Cape Town, South Africa,[61] Lagos, Nigeria,[62] and in Paris.[63] Cinco de Mayo is celebrated in Japan in Osaka and in Tokyo's Yoyogi Park Event Space as a celebration of Latin American culture.[64][65][66]