Zhao gained further success with Nomadland (2020), which attracted international recognition and won many awards, including the Golden Lion at the Venice Film Festival, the People's Choice Award at the Toronto International Film Festival, and numerous Best Picture awards. Zhao won awards for directing at the Academy Awards, Directors Guild of America Awards, Golden Globe Awards, and British Academy Film Awards; at each body, she was the second woman to win.[2][3] Earning four Academy Award nominations for the film, Zhao won both Best Picture and Best Director, becoming the second woman in history to win the latter after Kathryn Bigelow[4] in 2010,[5] and the first woman of color to win the category.[6] She also became the sixth woman to win multiple Academy Awards in the same year, after Edith Head, Catherine Martin, Fran Walsh, Kathryn Bigelow and Frances McDormand. The film has not received a theatrical release in China, with speculation that it was due to her past comments on the nation, and news of her Best Director win at the Academy Awards were also being censored.[7]

Zhao's next film is the Marvel Cinematic Universe superhero film Eternals,[1] which she wrote and directed, and is scheduled for release in November 2021.[1]

Zhao Ting (赵婷; Zhào Tíng) was born on 31 March 1982 in Beijing, her father Zhao Yuji (赵玉吉; Zhào Yùjí) was an executive at Shougang Group, one of the country's largest state owned steel companies. After amassing significant personal wealth, he later moved on to real-estate development and equity investment.[8] Her mother was a hospital worker who was in a People's Liberation Army performance troupe. In an interview with Vogue, she described herself as "a rebellious teen, lazy at school" who drew manga-influenced comics and wrote fan fiction. She loved films growing up, especially Happy Together by Wong Kar-wai.[9][10] From an early age, Zhao was drawn to influences from Western pop culture.[11] After her parents separated, her father married comic actress Song Dandan, whom Zhao had grown up watching on television.[8]

Although Zhao was still learning English at the time, her parents sent her to Brighton College, a private boarding school in the United Kingdom at the age of 15.[9][10] She later moved to Los Angeles by herself and attended Los Angeles High School.[12] She next attended Mount Holyoke College in Massachusetts, where she majored in politics and minored in film studies, graduating in 2005.[13][14][15] Following up on her undergraduate film minor, she next joined the Kanbar Institute of Film and Television Graduate Film Program[16] at New York University's Tisch School of the Arts.[17]

In 2015, Zhao directed her first feature, Songs My Brothers Taught Me. Shot on location at the Pine Ridge Indian Reservation in South Dakota, the film depicts the relationship between a Lakota Sioux brother and his younger sister. It premiered as part of the U.S. Dramatic Competition at Sundance Film Festival.[18] It later played at Cannes Film Festival as part of the Director's Fortnight selection[19] and was nominated for Best First Feature at the 31st Independent Spirit Awards.[20]

In 2017, Zhao directed The Rider, a contemporary western drama, which follows a young cowboy’s journey to self-discovery after a near-fatal accident ends his professional riding career.[21] The film was executive produced by her father, Yuji Zhao.[22] As with her first feature, Zhao engaged a cast of non-actors who lived at the filming location, in this case on a ranch.[23] Her inspiration came from Brady Jandreau—a cowboy she had met and befriended on the reservation where she shot her first film—who suffered a severe head injury when thrown from his horse during a rodeo competition.[24] Jandreau would star in the film, playing a fictionalized version of himself as Brady Blackburn.[24] 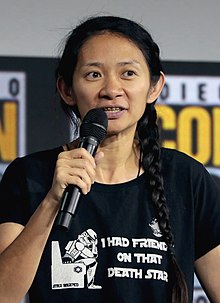 The film premiered at Cannes Film Festival as part of the Directors' Fortnight selection and won the Art Cinema Award.[25] It earned her nominations for Best Feature and Best Director at the 33rd Independent Spirit Awards. At the same ceremony, Zhao became the inaugural winner of the Bonnie Award, named after Bonnie Tiburzi, which recognizes a mid-career female director.[26][27] The film was released on April 13, 2018 by Sony Pictures Classics and was critically acclaimed.[28] Peter Keough of The Boston Globe wrote: "[The film] achieves what cinema is capable of at its best: It reproduces a world with such acuteness, fidelity, and empathy that it transcends the mundane and touches on the universal."[29]

In 2018, Zhao directed her third feature film, Nomadland, starring Frances McDormand.[30] The adaptation from Nomadland: Surviving America in the Twenty-First Century was shot over four months traveling the American West in an RV with many actual nomadic workers.[31] The film premiered at the Venice Film Festival, where it received critical acclaim and won the Golden Lion award,[32] and subsequently played at the 2020 Toronto International Film Festival, where it won the People's Choice Award.[33] The film was released on February 19, 2021 by Searchlight Pictures.[34] Zhao won the Golden Globe Award for Best Director for Nomadland, making her the first woman of Asian descent honored,[35] and only the second woman to win a Golden Globe for directing since Barbra Streisand in 1984.[2] In April 2021, Zhao won the Academy Award for Best Director, becoming the second woman to do so (Kathryn Bigelow being the first).

On February 15, 2021, Variety reported that with "34 awards season trophies for directing, 13 for screenplay and nine for editing, Chloe Zhao has surpassed Alexander Payne (Sideways) as the most awarded person in a single awards season in the modern era."[36][needs update]

In April 2018, it was announced that Amazon Studios greenlit Zhao's upcoming untitled Bass Reeves biopic, a historical Western about the first black U.S. Deputy Marshal. Zhao is set to direct the film and write the screenplay.[37] In September 2018, Marvel Studios hired her to direct Eternals, based on the comic book characters of the same name.[38] The film is set to be released on November 5, 2021. In February 2021, Variety confirmed that Zhao is tackling the classic Universal monster Dracula, as the writer, producer and director of a new take on the character in the vein of a futuristic sci-fi western.[39]

Zhao cites Wong Kar-wai's romance Happy Together (1997) as the "film that made me want to make films". She was also influenced by Spike Lee, who was her film professor while she studied at New York University's Tisch School of the Arts.[40][41] She cited Ang Lee as an influence as well, saying, "Ang Lee’s career has been very inspiring to me — how he’s able to bring where he comes from to all the films that he makes". She also has mentioned Werner Herzog and Terrence Malick as key influences.[42][43]

In 2013, Zhao was preparing to film Songs My Brothers Taught Me, and told the magazine Filmmaker that the premise of a closed environment with a high teen suicide rate reminded her of her Chinese upbringing:[44]

It goes back to when I was a teenager in China, being in a place where there are lies everywhere. You felt like you were never going to be able to get out. A lot of info I received when I was younger was not true, and I became very rebellious toward my family and my background. I went to England suddenly and relearned my history. Studying political science in a liberal arts college was a way for me to figure out what is real. Arm yourself with information, and then challenge that too.

Zhao then said that studying political science at college in Massachusetts has made her “turned off by politics”; instead she prefers "“meeting people and learning about their histories."[44]

Zhao's US film The Rider had a one-off screening at the 2017 Pingyao International Film Festival but did not have a theatrical release in China.[45] Zhao said in 2018 that while growing up in China, she felt constricted by "an ancient culture where I was expected to be a certain way" and was drawn to the Western genre. But she also went on and talked about being a Chinese citizen and praised the festival's celebration of Chinese culture. [10] In 2020, while promoting her US film Nomadland, she told News.com.au that she had felt like an outsider in the United States, in not having "the weight of history" on her. The website initially reported her statement, "The US is now my country, ultimately, but maybe, it is easier for me than how I see my friends are reacting [to everything], especially this year."[46] The comment was removed by February 16.[45] News.com.au later restored a corrected quote of Zhao, that she had said "not my country", instead of "now my country".[46][47]

Before the 78th Golden Globe Awards on February 28, 2021, Nomadland was scheduled to have a limited theatrical release in China on April 23, 2021.[48] When Zhao won the Golden Globe Award for Best Director for Nomadland at the ceremony, becoming the first woman of Asian descent to do so, Variety reported, "Although most Chinese viewers have yet to see the film, many cheered the Golden Globe win. Scores of posts praised Zhao's heartfelt acceptance speech about compassion and described her as an inspiration." It also wrote that many commentators "lamented that Zhao likely could never make such a powerful film about China, given the mainland's current censorship environment". Initially, state-owned media in China, including China Central Television, People's Daily, and Global Times, "sought to claim Zhao's glory for China". Shortly afterward, social media users learned of Zhao's 2013 comments in Filmmaker and then her incorrectly quoted comments to News.com.au, both of which had been removed in mid-February 2021. Variety reported that the original interviews were "translated and widely disseminated on the Chinese web, sparking controversy among nationalists". Users questioned Zhao's citizenship and debated "whether it is appropriate to claim Zhao's victory as China's", with Variety calling the claim "a common move by state-backed outlets to drum up nationalism".[45]

On March 5, 2021, the Chinese government censored mentions of Nomadland online. References to Nomadland's release in China were also removed. The New York Times reported, "It was not a complete blackout. Numerous stories about the movie were still online as of Saturday. And so far, there have been no reports that the film's China release was in jeopardy." The newspaper opined, "But the online censorship was the latest reminder of the power of rising nationalist sentiment in China and the increasingly complex political minefield that companies must navigate there." It believed that while Nomadland was not expected to have a significant box office gross in China due to its planned limited release and slow pace, and that "patriotic frenzy" could potentially impact the release of Eternals, directed by Zhao, in China, for which a release date had not yet been announced.[47]

Zhao resides in Burbank, with three chickens and two dogs,[51] and her partner and cinematographer, Joshua James Richards.[8]