Charles Sidney Grodin (April 21, 1935 – May 18, 2021) was an American actor, comedian, author, and television talk show host. Grodin began his acting career in the 1960s appearing in TV serials including The Virginian. After a small part in Rosemary's Baby in 1968, he played the lead in Elaine May's The Heartbreak Kid (1972) and supporting roles in Mike Nichols's Catch-22 (1970) and Warren Beatty's Heaven Can Wait (1978).

Known for his deadpan delivery and often cast as a put-upon straight man, Grodin became familiar as a supporting actor in many Hollywood comedies of the era, including Real Life (1979), Seems Like Old Times (1980), The Great Muppet Caper (1981), Ishtar (1987), Dave (1993) and Clifford (1994). Grodin co-starred in the action comedy Midnight Run (1988) and in the family film Beethoven (1992). He made frequent appearances on The Tonight Show with Johnny Carson and Late Night with David Letterman.

In the mid-1990s, Grodin retired from acting, and wrote several autobiographies, and became a talk show host on CNBC and in 2000 a political commentator for 60 Minutes II. He returned to acting with a handful of roles in the mid-2010s, including in Louis C.K.'s FX show Louie and Noah Baumbach's film While We're Young (2014).

Grodin won several awards, including the Primetime Emmy Award for Outstanding Writing for a Variety Special in 1978 for the Paul Simon Special alongside Chevy Chase, Lorne Michaels, Paul Simon, and Lily Tomlin. He was also nominated for a Golden Globe Award for Best Actor – Motion Picture Musical or Comedy for The Heartbreak Kid in 1972. He won Best Actor at the 1988 Valladolid International Film Festival for Midnight Run, and the American Comedy Award for Funniest Supporting Actor in a Motion Picture for his performance in Dave in 1993.

Grodin was born in Pittsburgh, Pennsylvania, to Orthodox Jewish parents,[2][3] Theodore, who owned a store that sold wholesale supplies, and Lena (née Singer), who worked in her husband's business and volunteered for disabled veterans.[4][5] His paternal grandfather had changed the family name from Grodinsky to Grodin.[6] His maternal grandfather was an immigrant from Russia who "came from a long line of rabbis" and moved to the Chesapeake Bay area at the turn of the 20th century. Grodin had an older brother, Jack.[7]

Grodin graduated as valedictorian from Peabody High School, where he was elected class president all four years.[8][9] He attended the University of Miami but left without graduating to pursue acting.[10] He studied acting at HB Studio[11] in New York City under Uta Hagen.

Grodin's film debut was an uncredited bit part in Disney's 1954 film 20,000 Leagues Under the Sea.[12] A student of Lee Strasberg and Uta Hagen, he made his Broadway debut in a production of Tchin-Tchin, opposite Anthony Quinn.[13] In 1965, he became an assistant to director Gene Saks and appeared on several television series including The Virginian.[14] Grodin had a small but pivotal part playing an obstetrician in the 1968 horror film Rosemary's Baby. In 1964, he played Matt Stevens on the ABC soap opera The Young Marrieds.[15] During the late 1960s, he also co-wrote and directed Hooray! It's a Glorious Day...and All That, a Broadway play, and directed Lovers and Other Strangers and Thieves, also on Broadway.[16] He also directed Simon and Garfunkel's television special Songs of America in 1969. However, he turned down the part of Benjamin Braddock in The Graduate because of the low salary offered by producer Lawrence Turman, although Turman assured him that the part would make him a star, as it ultimately did for Dustin Hoffman.

After a supporting role in the 1970 comedy film Catch-22, Grodin gained recognition as a comedy actor when he played the lead role in the 1972 film The Heartbreak Kid.[17] Grodin subsequently appeared in several films during the decade, including the 1976 version of King Kong, the hit 1978 comedy Heaven Can Wait, and Albert Brooks' 1979 comedy Real Life. He both starred in and wrote the screenplay for 11 Harrowhouse (1974). During the 1970s, he also frequently appeared on Broadway and was involved in producing several plays.

His Hollywood film roles of the 1980s usually saw him cast as uptight, bland, and world-weary white collar professionals, such as a psychiatrist having a nervous breakdown (The Couch Trip), a health conscious accountant (Midnight Run), an ineffectual advertising executive (Taking Care of Business), and a lonely, socially awkward nerd (The Lonely Guy). He was cast against this type as a scheming CIA agent in Ishtar.

Commenting on his work with regard to Ishtar, Hal Hinson in The Washington Post observed: "Grodin has a one-of-a-kind quality on the screen, a sort of inspired spinelessness. And with his cat-burglar rhythms – he seems to play all his scenes as if someone were asleep in the next room – he's become a very sly scene-stealer."[18] Sandra Brennan at Rovi noted that: "Whereas many funnymen have been popular for their ability to overreact and mug their way around everyday obstacles, Grodin belonged, from the beginning, to the Bob Newhart school of wry comedy that values understatement and subtlety."[13]

Aside from his film work, he was a frequent presence on television. In 1977, Grodin hosted an episode of the NBC sketch show Saturday Night Live, where the entire episode revolved around his forgetting that the show was live, and he proceeded to wreck sketches because of his failure to prepare accordingly.[19] His many talk show appearances from the 1970s to the early 2020s often included confrontational and mock angry segments. At one time Johnny Carson "banned" him from The Tonight Show appearances after taking offense at things Grodin had said. The NBC network would receive angry letters from viewers who didn't understand the joke that he was playing a persona, trying to be as different from typical talk show guests as possible. His appearances on Late Night With David Letterman would sometimes erupt into shouting and name-calling, but Letterman always enjoyed Grodin's segments.[20]

Grodin's career took a turn in 1992, when he played the nervous family man George Newton in the kids' comedy Beethoven, opposite Bonnie Hunt. The film was a box-office hit, and he reprised the role in the 1993 sequel, Beethoven's 2nd. Also in 1993, Grodin played the role of Harrison Winslow in the film Heart and Souls.[21] After a supporting role in the acclaimed Ivan Reitman comedy Dave, Grodin signed on to play The Old Man in the 1994 limited release sequel to A Christmas Story, It Runs in the Family (a.k.a. My Summer Story). That same year also saw the much-delayed release of Clifford, in which Grodin portrayed the frustrated uncle opposite Martin Short's title role.

In 2004, Grodin wrote The Right Kind of People, an Off-Broadway play about co-op boards in certain buildings in Manhattan. Grodin's commentaries were heard on New York City radio station WCBS and other affiliates of the CBS Radio Network, as well as on the CBS Radio Network's Weekend Roundup.

After a 12-year-long hiatus from film, in 2006 Grodin returned to acting in the comedy The Ex starring Zach Braff.[25] 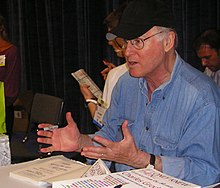 Grodin at the Book Expo 2007 at the Javits Center, New York City

In the 2010s, Grodin made more frequent acting appearances, guest starring on television shows such as Law and Order: Special Victims Unit and The Michael J. Fox Show. Grodin had several supporting roles in films, including Barry Levinson's The Humbling (2014) and Taylor Hackford's The Comedian (2016). He had a prominent supporting role in Noah Baumbach's While We're Young (2015), playing a celebrated documentary filmmaker and the father of one of the lead characters.

In 2015, Grodin was cast in a recurring role in Louis C.K.'s acclaimed FX show Louie as Dr. Bigelow, C.K.'s philosophical doctor and mentor in Season 4 and 5. In an interview with Deadline, Grodin talked about his relationship with C.K. stating, "I find him to be the single most talented person that I've ever worked with, he's a wonderful director, writer, and actor".[26][27]

He also portrayed the philanthropist and defrauded investor Carl J. Shapiro in the 2016 miniseries Madoff on ABC based on the Bernie Madoff Ponzi scheme debacle.[28]

Grodin was also a prolific author and published his final book in 2013.

Grodin is mentioned as a hero of Mac and Dennis in an episode of It's Always Sunny in Philadelphia.[citation needed]

He was referenced in three different episodes of The Simpsons (I'm Spelling as Fast as I Can, Little Big Girl and Mathlete's Feat).