Major feature of the supercontinent 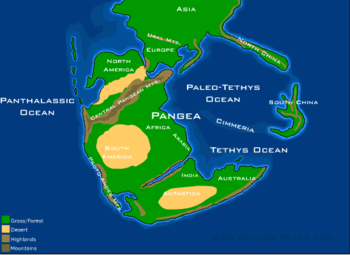 Map of Pangaea, including the Central Pangean Mountains.

The Central Pangean Mountains were an extensive northeast-southwest trending mountain range in the central portion of the supercontinent Pangaea during the Carboniferous, Permian and Triassic periods. They were formed as a result of collision between the minor supercontinents Laurussia and Gondwana during the formation of Pangaea.[1] At its greatest elevation during the early part of the Permian period, it was comparable to the present Himalayas. Remnants of this massive mountain range include the Appalachian Mountains and Ouachita Mountains of North America, the Little Atlas of Morocco, Africa and much of the Scottish Highlands including Ben Nevis.

A number of mountain building periods were involved in the formation of the Central Pangean Mountains, including the Acadian, Caledonian, Alleghenian and Mauritanide orogenies.

The Central Pangean Mountains were formed during the collision of Laurasia and northern Gondwana as part of the Variscan and Alleghanian orogenies, which began during the Carboniferous approximately 340 million years ago, and complete by the beginning of the Permian around 295 million years ago, when the range was at its maximum elevation. During the Permian, the mountain range was subjected to intense physical and mechanical weathering, reducing the peaks to around half their original size by the Late Permian (Lopingian) and creating numerous deep intermontane valleys. By the Middle Triassic the Central Pangean mountains had been substantially reduced in size, and by the earliest Jurassic around 200 million years ago the Pangean range in Western Europe had been reduced to a few upland areas surrounded by deep marine basins.[2]