Mexican politician (1927–2001)
"Hank González" redirects here. For the Mexicable stations, see Hank González (Mexicable).
In this Spanish name, the first or paternal surname is Hank and the second or maternal family name is González. 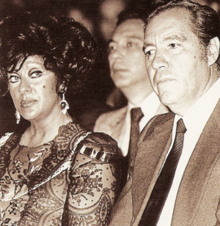 Carlos Hank González (1927–2001), nicknamed El Profesor ("The Professor"), was a Mexican politician and influential businessman. Originally a teacher, he was an entrepreneur who built political contacts along with a business empire, leading to various government and political positions at the state (State of Mexico) and national level. He was prevented from seeking the presidency due to laws requiring both parents to be Mexicans by birth, whereas his father was German.[1] He was involved in drug trafficking, money laundering, corruption, and criminal threats.[2][3]

Carlos Hank González was born in Santiago Tianguistenco in the State of Mexico. He graduated from the Escuela Nacional de Toluca as a primary education teacher and from the Normal Superior (Teacher's College) de México as a professor of history and biology. From 1947 to 1951 he was a teacher at the Secundaria Federal de Atlacomulco.[4] To supplement his income, he sold candy on the side. He grew and exchanged his small businesses into larger ones, along the way adding names of prominent politicians to his list of contacts. He founded a business empire of banking and transportation interests, including the foundation of airline Taesa. In 1999, Forbes estimated his wealth at about US$1.3 billion but other sources say that figure should be much higher.[5]

Hank González's political career began when he moved from Atlacomulco to Toluca to take charge of the State of Mexico's Departmento de Escuelas Secundarias y Profesionales (Department of Professional and Secondary Schools) as well as the Oficina de Juntas de Mejoramiento Moral, Cívico y Material (Office of Committees for Moral, Civic and Material Improvement) between 1952 and 1953. The following year he was in charge of the treasury for the municipality of Toluca. From 1955 to 1957 he was the president of the ayuntamiento of Toluca.[4]

His federal service began in 1961 when he became a congressman (diputado federal) for the XLIV Legislature. However, at the height of his political career, he served as the governor of the State of Mexico from 1969 to 1975 and was appointed "regent"(similar to mayor) of Mexico City in 1976. Federally, he served as Secretary of Tourism from 1988 to 1990 when he was then named as Secretary of Agriculture and Hydraulic Resources.[4]

He was considered one of the leaders of the old guard wing of the Institutional Revolutionary Party (PRI)[6] He began as chief of the Delegación del Sector Popular at district, state and national conventions of the PRI, then was a delegate for the party for the states of Chiapas, Tabasco, Campeche and Quintana Roo. He worked his way up to be a member of the Comisión Pólitica del Comité Ejecutivo Nacional, advising presidents of the party.[4] His death not only left a vacant place in the party structure of the PRI but it also signaled the end of a cycle in Mexican politics where the PRI dominated everything.[6]

Constitutionally barred from running for the Mexican presidency by a provision then in force which excluded those with a foreign-born parent from holding the office. His father, Jorge Hank Weber, was German and a colonel in both the German and Mexican armies.[6] However, Carlos Hank had great influence in the PRI party, culminating in the late 1980s and early 1990s during the presidency of Carlos Salinas de Gortari. Other evidence of his wide-ranging connections came in the form of his birthday celebration every year on August 28, when "The professor" would have a grand party at his ranch called "Don Catarino" in Santiago Tianguistenco with thousands of invited guests.[7]

As mayor of Mexico City, he built the Eje vial system of roads and other projects designed to make the city more car-friendly.

In 1997, Carlos Hank González suffered an embolism[4] and died in 2001 of cancer, spending the last few years of his life in the United States for treatment.[7]

According to a report by the U.S. National Drug Intelligence Center (NDIC) nicknamed Operation White Tiger, he -and now his two sons- are so involved in drug trafficking and money laundering that they "pose a significant criminal threat to the United States."[8][9][10] While U.S. law enforcement officials have spent years investigating Carlos Hank Gonzalez and his sons Carlos Hank Rhon and Jorge Hank Rhon, the assessment by several agencies marks the first time that all three have been linked directly to the operations of major Mexican drug organizations.[8] The report drew on information from the U.S. Drug Enforcement Administration, FBI, U.S. Customs Service, CIA, Interpol and others. The report says intelligence agencies had intercepted conversations of the Hank family coordinating drug shipments.[8] The document concludes that the Hank family has laundered money on a massive scale, assisted drug trafficking organizations in transporting drug shipments, and is engaged in large-scale public corruption,[8] and was closely associated with the late Juárez Cartel leader Amado Carrillo Fuentes. A report by the World Policy Institute presented to the U.S. Senate Committee on Foreign Relations, described Carlos Hank as the "primary intermediary between the multinational drug trafficking enterprises and the Mexican political system".[10]

Following the media revelations about Operation White Tiger, the Hank family, which has denied it is linked to or protecting top Mexican narcotraffickers, lobbied the U.S. Justice Department. With the assistance of Republican former U.S. senator Warren Rudman, whom Carlos Hank Rhon hired to represent his interests in Washington, Hank secured from United States Attorney General Janet Reno a letter contradicting the NDIC analysis.[9] The attorney general's retraction of an intelligence analysis based on dozens of past investigations on the Hank family and on new lines of inquiry came as a bitter disappointment to members of the San Diego-based Operation White Tiger Task Force. The Hanks and their supporters insist that Reno's intervention was just and that they have been victims of innuendo spread by their political and business rivals.[9]

From the start, agents involved in the probe feared that Washington would conclude that Operation White Tiger was too controversial and potentially too disruptive to Mexican-American relations for it to continue. They suspected it would be blocked, as previous investigations of top Mexican politicians.[9]

Carlos Hank appears in a prominent role as link between government and drug traffickers in Season 3 of the Netflix serial drama Narcos: Mexico.