Carl Reiner (March 20, 1922 – June 29, 2020) was an American actor, comedian, director, screenwriter, and author whose career spanned seven decades. During the early years of television comedy from 1950 to 1957, he acted on and contributed sketch material for Your Show of Shows and Caesar's Hour, starring Sid Caesar. In the 1960s, Reiner was best known as the creator, producer, writer, and actor on The Dick Van Dyke Show.[1][2]

Reiner appeared in dozens of television specials from 1967 to 2000 and was a guest star on television series from the 1950s to 2000.[3] He also voiced characters in film and animated films, and was a reader for books on tape. He wrote more than two dozen books, mostly in his later years.

Reiner was the recipient of many awards and honors, including 11 Emmy Awards,[4] one Grammy Award,[5] and the Mark Twain Prize for American Humor.[6] He was inducted into the Television Hall of Fame in 1999.[4] He was the father of actor and director Rob Reiner, author Annie Reiner, and artist Lucas Reiner, and the grandfather of Tracy Reiner.

Carl Reiner was born on March 20, 1922, in the Bronx, New York City. His father Irving Reiner was a watchmaker; his mother was Bessie (née Mathias) Reiner.[7][8][9] His parents were Jewish immigrants; his father was from Austria and his mother Romania.[10] His older brother Charlie served in the 9th Division in World War II; his ashes are buried at Arlington National Cemetery.[11]

When he was 16, Carl was working as a machinist repairing sewing machines. His brother Charlie read about a free drama workshop sponsored by the Works Progress Administration and told Carl about it. Carl later credited Charlie with his decision to change careers.[12][13] His uncle Harry Mathias was the first entertainer in his family.[14]

Reiner was drafted into the United States Army Air Forces on October 27, 1942,[15] and served during World War II, eventually achieving the rank of corporal by the end of the war.[16] He initially trained to be a radio operator. After spending three months in the hospital recovering from pneumonia, he was sent to Georgetown University for ten months of training as a French interpreter. There he had his first experience as a director, putting on a Molière play entirely in French. After completing language training in 1944, he was sent to Hawaii to work as a teleprinter operator. The night before he was scheduled to ship out for an unknown assignment, he attended a production of Hamlet by the Special Services entertainment unit. Following an audition before actor and major Maurice Evans, he was transferred to Special Services. Over the following two years, Reiner performed around the Pacific theater, entertaining troops in Hawaii, Guam, Saipan, Tinian and Iwo Jima until he was honorably discharged in 1946.[16]

Reiner performed in several Broadway musicals (including Inside U.S.A. and Alive and Kicking), and had the lead role in Call Me Mister.[17] In 1950, he was cast by Max Leibman as a comic actor on Sid Caesar's Your Show of Shows, appearing on air in skits while also contributing ideas to writers such as Mel Brooks and Neil Simon.[17] He did not receive credit for his sketch material, but won Emmy Awards in 1955 and 1956 as a supporting actor.[17] Reiner also wrote for Caesar's Hour with Brooks, Simon, Woody Allen, Larry Gelbart, Mel Tolkin, Mike Stewart, Aaron Ruben, Sheldon Keller, and Gary Belkin.[18]

Starting in 1960, Reiner teamed with Brooks as a comedy duo on The Steve Allen Show. Their performances on television and stage included Reiner playing the straight man in 2000 Year Old Man.[19] Eventually, the routine expanded into a series of 5 comedy albums and a 1975 animated television special, with the last album in the series winning a Grammy Award for Best Spoken Word Comedy Album.[19][20] The act gave Brooks "an identity as a comic performer for the first time," said Reiner.[21] Brooks's biographer, William Holtzman, called their 12-minute act "an ingenious jazz improvisation ...",[21] while Gerald Nachman described Reiner's part in guiding the act:

The routine relies totally on the team's mental agility and chemistry. It's almost heresy to imagine Brooks performing it with any other straight man. Reiner was a solid straight man to Caesar, but with Brooks he is the second-banana supreme...guiding his partner's churning comic mind.[21][22] 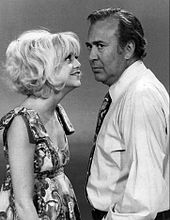 In 1958, Reiner wrote the initial 13 episodes of a television series titled Head of the Family, based on his own personal and professional life. However, the network did not like Reiner in the lead role for unknown reasons.[17] In 1961, the show was recast and re-titled The Dick Van Dyke Show and became an iconic series, making stars of his lead actors Dick Van Dyke and Mary Tyler Moore. In addition to writing many of the episodes, Reiner occasionally appeared as temperamental show host Alan Brady.[17] The series ran from 1961 to 1966 and thereafter entered a long run of syndication.[17] In 1966, Reiner co-starred in The Russians Are Coming, the Russians Are Coming.[23]

Reiner's first film directorial effort was an adaptation of Joseph Stein's play Enter Laughing (1967), which, in turn, was based on Reiner's semi-autobiographical 1958 novel of the same name.[6] Balancing directing, producing, writing, and acting, Reiner worked on a wide range of films and television programs. Films from his early directing career include Where's Poppa? (1970), Oh, God! (1977), and The Jerk (1979).[24][25][26]

Of all the films I have directed, only Where's Poppa? is universally acknowledged as a cult classic. A cult classic, as you may know, is a film that was seen by a small minority of the world's film goers, who insist it is one of the greatest, most daring, and innovative moving pictures ever made. Whenever two or more cult members meet, they will quote dialogue from the classic and agree that "the film was ahead of its time." To be designated a genuine cult classic, it is of primary importance that the film fail to earn back the cost of making, marketing, and distributing it. Where’s Poppa? was made in 1969 for a little over $1 million. According to the last distribution statements I saw, it will not break even until it earns another $650,000.[27] 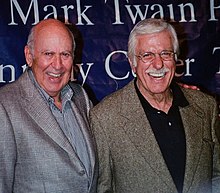 In 2000, Reiner was honored with the Mark Twain Prize for American Humor at the Kennedy Center,[6] where he was honored by fellow friends and comedians, Mel Brooks, Dick Van Dyke, Mary Tyler Moore, Steve Martin, Rob Reiner, Jerry Seinfeld, Ray Romano, and Joy Behar. A year later, he portrayed Saul Bloom in Ocean's Eleven, Steven Soderbergh's remake of 1960's Ocean's 11,[30] and later reprised the role in Ocean's Twelve (2004) and Ocean's Thirteen (2007).[31][32] From 2004 to 2005, Reiner voiced Sarmoti in Father of the Pride.[33]

Reiner appeared in dozens of television specials from 1967 to 2000.[3] He also guest starred in television series from the 1950s to 2000.[3] In May 2009, Reiner guest starred as a clinic patient in "Both Sides Now", the season five finale of House.[34] He also voiced Santa in Merry Madagascar (2009)[35] and reprised his role in the Penguins of Madagascar episode "The All Nighter Before Christmas" (2010).[36] In season 7 (December 2009) of Two and a Half Men, he guest-starred as television producer Marty Pepper.[37] In 2010, he guest starred in three of the first-season episodes of Hot in Cleveland as Elka Ostrovsky's (Betty White) date and reprised the role in February 2011.[38] He also made appearances in The Cleveland Show as Murray[39] and wrote the story for the episode "Your Show of Shows", named after the program that started his career. Reiner reprised his role on Two and a Half Men in seasons 8 (October 2013) and 11 (January 2014).[37]

In 2012, Reiner appeared as a guest on Jerry Seinfeld's show Comedians in Cars Getting Coffee. They talked at a diner about his comedy career and Reiner invited Jerry to come and have dinner with Mel Brooks and himself. Reiner reported that every night, Brooks headed to his house to eat, watch Jeopardy (he taped it) and watch movies. He went on to offer the one rule for movies was that it had to be one where "somebody says, 'Secure the perimeter!' or 'Get some rest.'" Brooks "falls asleep with his mouth open" every time.[40]

Reiner lent his voice to numerous films and animated films.[3] He also read for books on tape, among them Aesop's Fables and Jack and the Beanstalk (Running Press, 1994), and Mark Twain's A Connecticut Yankee in King Arthur's Court, The Prince and the Pauper, and Letters from the Earth (New Millenium, 2001).[3]

Reiner was the author of more than two dozen books.[41] His first autobiographical novel, Enter Laughing (1958), led to a 1995 sequel, Continue Laughing. He published a memoir, My Anecdotal Life: A Memoir, in 2003.[42] He also wrote a humorous series of memoirs under the titles I Remember Me (2012), I Just Remembered (2014), and What I Forgot To Remember (2015), along with books about film and art. He began writing children's books based on the stories he used to tell a certain grandchild who would request, "Tell me a scary story, Grandpa, but not too scary".[43]

Reiner joined Twitter in 2012, tweeting that he was doing so to keep up with his grandson, Jake.[44] He felt obliged to post at least once per day, and so posted 6,520 tweets and accumulated 367,000 followers.[44] His favorite topics were movies and Donald Trump, but his last tweet was a reminiscence about Noël Coward performing in Las Vegas.[44]

His final interview was a webisode of Dispatches From Quarantine which was posted on YouTube by the Jewish arts organisation, Reboot, and Temple Beth Am.[45][46] In this, he reminisced about his wife and family, "We met, fell in love, and I was 20 at the time and she was 28, and people said this is not a match ... It only worked for 65 years, and if she didn’t pass on we’d still be working on it."[45]

Reiner expressed his philosophy on writing comedy in an interview in the December 1981 issue of American Film:

You have to imagine yourself as not somebody very special, but somebody very ordinary. If you imagine yourself as somebody really normal and if it makes you laugh, it's going to make everybody laugh. If you think of yourself as something very special, you'll end up a pedant and a bore. If you start thinking about what's funny, you won't be funny, actually. It's like walking. How do you walk? If you start thinking about it, you'll trip.[3] 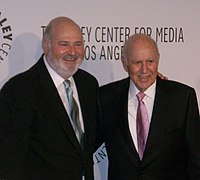 Reiner described himself as a Jewish atheist.[10] He said, "I have a very different take on who God is. Man invented God because he needed him. God is us."[50][51] He said in 2013 he developed an atheistic viewpoint as the Holocaust progressed.[52]

Reiner was a Democrat.[47] His residence was in Beverly Hills, California.[53] Reiner died at his home on June 29, 2020, aged 98, in the company of his family.[54][55] Many comedians and figures in the entertainment industry spoke out in celebration of Reiner's life, including Mel Brooks, Woody Allen, Alan Alda, Steve Martin, Jerry Seinfeld, Dick Van Dyke, Carol Burnett, George Clooney, Bette Midler, Bernadette Peters, and Sarah Silverman.[56][57]

Reiner's star on the Hollywood Walk of Fame

Over Reiner's long television and film career, he earned numerous awards. From his standup comedy albums with Mel Brooks, to writing on Your Show of Shows, Caesar's Hour, and The Dick Van Dyke Show, Reiner earned 11 Primetime Emmy Awards and one Grammy Award.