Brentford Football Club is a professional football club based in Brentford, West London, England. They currently compete in the Premier League, the highest tier of English football, having gained promotion via the playoffs at the end of the 2020–21 Championship season. Nicknamed "the Bees", the club was founded in 1889 and played home matches at Griffin Park from 1904 before moving to Brentford Community Stadium in 2020. Their main rivals are fellow West London clubs Fulham and Queens Park Rangers.

Brentford initially played amateur football before they entered the London League in 1896 and finished as runners-up of the Second Division and then the First Division to win election into the Southern League in 1898. They won the Southern League Second Division in 1900–01 and were elected into the Football League in 1920. Brentford won the Third Division South title in 1932–33 and the Second Division title in 1934–35. The club enjoyed a successful spell in the top flight of English football, reaching a peak of fifth in the First Division, in 1935–36, their highest ever league finish, before three relegations left them in the Fourth Division by 1962. They were crowned Fourth Division champions in 1962–63, but were relegated in 1966 and again in 1973 after gaining promotion in 1971–72. Brentford spent 14 seasons in the Third Division after gaining promotion in 1977–78 and went on to win the Third Division title in 1991–92, though were relegated again in 1993.

Brentford were relegated into the fourth tier in 1998 and won promotion as champions in the 1998–99 campaign. The club were relegated in 2007 and won promotion as champions of League Two in 2008–09 and then were promoted out of League One in 2013–14. They had unsuccessful Championship play-off campaigns in 2015 and 2020. Brentford have a poor record in finals, finishing as runners-up in three Associate Members' Cup / Football League Trophy finals (1985, 2001 and 2011) and losing four play-off finals (the 1997 Second Division final, 2002 Second Division final, 2013 League One final and 2020 Championship final). However, Brentford won the 2021 Championship final to be promoted to the highest level for the first time since the 1946-47 season.[2]

League positions of Brentford since the 1920–21 season of the Football League.

Current and past grounds 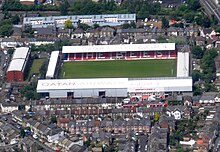 Further information on the B team: Brentford F.C. Reserves and Academy

Brentford's nickname is "The Bees".[10] The nickname was unintentionally created by students of Borough Road College in the 1890s, when they attended a match and shouted the college's chant "buck up Bs" in support of their friend and then-Brentford player Joseph Gettins.[10] Local newspapers misheard the chant as "Buck up Bees" and the nickname stuck.[11]

Brentford's predominant home colours are a red and white striped shirt, black shorts and red or black socks.[12] These have been the club's predominant home colours since the 1925–26 season, bar one season – 1960–61 – when yellow (gold) and blue were used, unsuccessfully.[13] The colours on entering the Football League, in 1920–21, were white shirts, navy shorts and navy socks.[12] Away kits have varied over the years, with the current colours being a black shirt with black shorts, both with yellow detailing, along with yellow socks. Brentford have had several badges on their shirts since it was formed in 1889.[14] The first one, in 1893, was a white shield, with 'BFC' in blue and a wavy line in blue, which is thought to represent the river and the rowing club, who founded the football club.[14] The next known badge, the Middlesex County Arms, was on shirts donated by a club supporter in 1909.[14] The Brentford and Chiswick arms, as a badge, was used just for the one season, in 1938–39.[14] The next badge wasn't until 1971–72 when a shield, formed into quadrants, which had a hive and bees in one, 3 seaxes in another and the other two with red and white stripes.[14] In 1972, the club organised a competition to design a new crest, which was won by Mr BG Spencer's design, a circle with a bee and stripes with founded 1888. This was introduced in 1973 and used until May 1975, when it was brought to the club's attention, via Graham Haynes, that the club was formed in 1889 and not in 1888. Therefore, a new badge, reputedly designed by Dan Tana – the club's chairman at the time – was introduced for the 1975–76 season and continued until 1994 when the current badge was introduced.[14] In 2011 Russell Grant claimed to have designed the badge in a BBC interview,[15] however it was in fact designed in 1993 for two season tickets by supporter Andrew Henning, following a request from Keith Loring the then chief executive.[13] In 2017, the club redesigned its crest to a more modern, uncluttered, design with the flexibility for use in two tone colour print.[14] The design is a double roundel with the club name and year founded in white on a red background and a large central bee.[14]

Brentford's main rivals are Fulham and Queens Park Rangers.[33] The club have a long standing rivalry with Fulham.[34] In the past this fixture has been marred by crowd violence.[35] Brentford's rivalry with Queens Park Rangers intensified in 1967, when Rangers failed in an attempted takeover of the Bees, a move which, had it succeeded, would have seen Rangers move into Griffin Park and Brentford quit the Football League.[36][37] As with the Fulham rivalry, this fixture sees passions run high amongst both sets of supporters with local pride at stake.[38]

In February 2013, it was announced that Brentford had entered into partnership with Icelandic 1. deild karla club UMF Selfoss, which would enable Brentford to send youth and development squad players to Iceland to gain experience.[39] The partnership also sees the two clubs exchanging coaching philosophies and allows Brentford to utilise UMF Selfoss' scouting network.[39] In May 2013, the Brentford staff forged links with Ugandan lower league club Gulu United as part of the "United for United" project, aimed at forming the region's first youth training camp and identifying talented players.[40] Brentford owner Matthew Benham became majority shareholder in Danish club FC Midtjylland in 2014 and the staff of both clubs share ideas.[41]