Physical damage to the continuity of the bone
"Broken bones" redirects here. For other uses, see Broken Bones.
Medical condition

A bone fracture (abbreviated FRX or Fx, Fx, or #) is a medical condition in which there is a partial or complete break in the continuity of the bone. In more severe cases, the bone may be broken into several pieces.[1] A bone fracture may be the result of high force impact or stress, or a minimal trauma injury as a result of certain medical conditions that weaken the bones, such as osteoporosis, osteopenia, bone cancer, or osteogenesis imperfecta, where the fracture is then properly termed a pathologic fracture.[2]

Although bone tissue contains no pain receptors, a bone fracture is painful for several reasons:[3]

Damage to adjacent structures such as nerves, muscles or blood vessels, spinal cord, and nerve roots (for spine fractures), or cranial contents (for skull fractures) may cause other specific signs and symptoms. 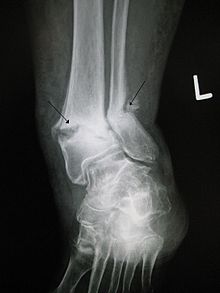 An old fracture with nonunion of the fracture fragments

Some fractures may lead to serious complications including a condition known as compartment syndrome. If not treated, eventually, compartment syndrome may require amputation of the affected limb. Other complications may include non-union, where the fractured bone fails to heal or mal-union, where the fractured bone heals in a deformed manner. One form of malunion is the malrotation of a bone, which is especially common after femoral and tibial fractures.

Complications of fractures may be classified into three broad groups, depending upon their time of occurrence. These are as follows –

The natural process of healing a fracture starts when the injured bone and surrounding tissues bleed, forming a fracture hematoma. The blood coagulates to form a blood clot situated between the broken fragments. Within a few days, blood vessels grow into the jelly-like matrix of the blood clot. The new blood vessels bring phagocytes to the area, which gradually removes the non-viable material. The blood vessels also bring fibroblasts in the walls of the vessels and these multiply and produce collagen fibres. In this way, the blood clot is replaced by a matrix of collagen. Collagen's rubbery consistency allows bone fragments to move only a small amount unless severe or persistent force is applied.

At this stage, some of the fibroblasts begin to lay down bone matrix in the form of collagen monomers. These monomers spontaneously assemble to form the bone matrix, for which bone crystals (calcium hydroxyapatite) are deposited in amongst, in the form of insoluble crystals. This mineralization of the collagen matrix stiffens it and transforms it into bone. In fact, bone is a mineralized collagen matrix; if the mineral is dissolved out of bone, it becomes rubbery. Healing bone callus on average is sufficiently mineralized to show up on X-ray within 6 weeks in adults and less in children. This initial "woven" bone does not have the strong mechanical properties of mature bone. By a process of remodelling, the woven bone is replaced by mature "lamellar" bone. The whole process may take up to 18 months, but in adults, the strength of the healing bone is usually 80% of normal by 3 months after the injury.

Although there are theoretical concerns about NSAIDs slowing the rate of healing, there is not enough evidence to warrant withholding the use of this type analgesic in simple fractures.[5]

Smokers generally have lower bone density than non-smokers, so they have a much higher risk of fractures. There is also evidence that smoking delays bone healing.[6] 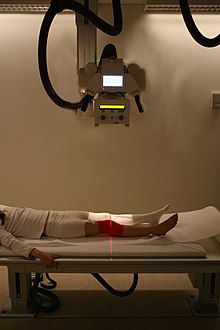 Radiography to identify possible fractures after a knee injury

A bone fracture may be diagnosed based on the history given and the physical examination performed. Radiographic imaging often is performed to confirm the diagnosis. Under certain circumstances, radiographic examination of the nearby joints is indicated in order to exclude dislocations and fracture-dislocations. In situations where projectional radiography alone is insufficient, Computed Tomography (CT) or Magnetic Resonance Imaging (MRI) may be indicated. 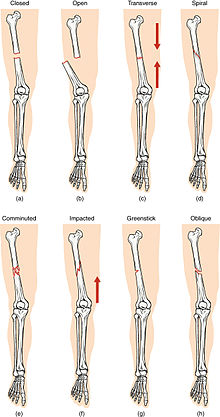 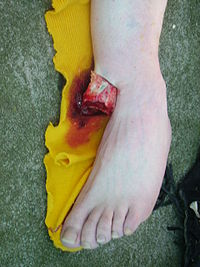 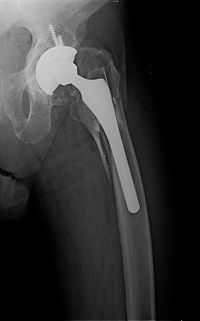 In orthopedic medicine, fractures are classified in various ways. Historically they are named after the physician who first described the fracture conditions, however, there are more systematic classifications as well.

They may be divided into stable versus unstable depending on the likelihood that they may shift further.

An anatomical classification may begin with specifying the involved body part, such as the head or arm, followed with more specific localization. Fractures that have additional definition criteria than merely localization often may be classified as subtypes of fractures, such as a Holstein-Lewis fracture being a subtype of a humerus fracture. Most typical examples in an orthopaedic classification given in the previous section cannot be classified appropriately into any specific part of an anatomical classification, however, as they may apply to multiple anatomical fracture sites.

The Orthopaedic Trauma Association Committee for Coding and Classification published its classification system [15] in 1996, adopting a similar system to the 1987 AO Foundation system.[16] In 2007, they extended their system,[17] unifying the two systems regarding wrist, hand, foot, and ankle fractures.

A number of classifications are named after the person (eponymous) who developed it.

Both high- and low-force trauma can cause bone fracture injuries.[23][24] Preventive efforts to reduce motor vehicle crashes, the most common cause of high-force trauma, include reducing distractions while driving.[25] Common distractions are driving under the influence and texting or calling while driving, both of which lead to an approximate 6-fold increase in crashes.[25] Wearing a seatbelt can also reduce the likelihood of injury in a collision.[25]

A common cause of low-force trauma is an at-home fall.[23][24] When considering preventative efforts, the National Institute of Health (NIH) examines ways to reduce the likelihood of falling, the force of the fall, and bone fragility.[26] To prevent at-home falls they suggest keeping cords out of high-traffic areas where someone could trip, installing handrails and keeping stairways well-lit, and installing an assistive bar near the bathtub in the washroom for support.[26] To reduce the impact of a fall the NIH recommends to try falling straight down on your buttocks or onto your hands.[26] Finally, taking calcium vitamin D supplements can help strengthen your bones.[26] 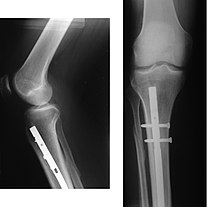 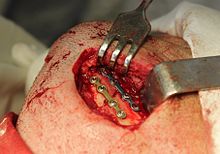 The surgical treatment of mandibular angle fracture; fixation of the bone fragments by the plates, the principles of osteosynthesis are stability (immobility of the fragments that creates the conditions for bones coalescence) and functionality

Treatment of bone fractures are broadly classified as surgical or conservative, the latter basically referring to any non-surgical procedure, such as pain management, immobilization or other non-surgical stabilization. A similar classification is open versus closed treatment, in which open treatment refers to any treatment in which the fracture site is opened surgically, regardless of whether the fracture is an open or closed fracture.

In arm fractures in children, ibuprofen has been found to be as effective as a combination of paracetamol and codeine.[27]

Since bone healing is a natural process that will occur most often, fracture treatment aims to ensure the best possible function of the injured part after healing. Bone fractures typically are treated by restoring the fractured pieces of bone to their natural positions (if necessary), and maintaining those positions while the bone heals. Often, aligning the bone, called reduction, in a good position and verifying the improved alignment with an X-ray is all that is needed. This process is extremely painful without anaesthesia, about as painful as breaking the bone itself. To this end, a fractured limb usually is immobilized with a plaster or fibreglass cast or splint that holds the bones in position and immobilizes the joints above and below the fracture. When the initial post-fracture oedema or swelling goes down, the fracture may be placed in a removable brace or orthosis. If being treated with surgery, surgical nails, screws, plates, and wires are used to hold the fractured bone together more directly. Alternatively, fractured bones may be treated by the Ilizarov method which is a form of an external fixator.

Occasionally smaller bones, such as phalanges of the toes and fingers, may be treated without the cast, by buddy wrapping them, which serves a similar function to making a cast. A device called a Suzuki frame may be used in cases of deep, complex intra-articular digit fractures.[28] By allowing only limited movement, immobilization helps preserve anatomical alignment while enabling callus formation, toward the target of achieving union.

Splinting results in the same outcome as casting in children who have a distal radius fracture with little shifting.[29]

Surgical methods of treating fractures have their own risks and benefits, but usually, surgery is performed only if conservative treatment has failed, is very likely to fail, or likely to result in a poor functional outcome. With some fractures such as hip fractures (usually caused by osteoporosis), surgery is offered routinely because non-operative treatment results in prolonged immobilisation, which commonly results in complications including chest infections, pressure sores, deconditioning, deep vein thrombosis (DVT), and pulmonary embolism, which are more dangerous than surgery. When a joint surface is damaged by a fracture, surgery is also commonly recommended to make an accurate anatomical reduction and restore the smoothness of the joint.

Infection is especially dangerous in bones, due to the recrudescent nature of bone infections. Bone tissue is predominantly extracellular matrix, rather than living cells, and the few blood vessels needed to support this low metabolism are only able to bring a limited number of immune cells to an injury to fight infection. For this reason, open fractures and osteotomies call for very careful antiseptic procedures and prophylactic use of antibiotics.

Occasionally, bone grafting is used to treat a fracture.

Sometimes bones are reinforced with metal. These implants must be designed and installed with care. Stress shielding occurs when plates or screws carry too large of a portion of the bone's load, causing atrophy. This problem is reduced, but not eliminated, by the use of low-modulus materials, including titanium and its alloys. The heat generated by the friction of installing hardware can accumulate easily and damage bone tissue, reducing the strength of the connections. If dissimilar metals are installed in contact with one another (i.e., a titanium plate with cobalt-chromium alloy or stainless steel screws), galvanic corrosion will result. The metal ions produced can damage the bone locally and may cause systemic effects as well.

A Cochrane review of low-intensity pulsed ultrasound to speed healing in newly broken bones found insufficient evidence to justify routine use.[30] Other reviews have found tentative evidence of benefit.[31] It may be an alternative to surgery for established nonunions.[32]

In children, whose bones are still developing, there are risks of either a growth plate injury or a greenstick fracture.