The Battle of Hayes Pond or Maxton Riot was an armed confrontation between members of the Ku Klux Klan and the Lumbee Native Americans at a Klan rally near Maxton, North Carolina, on the night of January 18, 1958. James W. "Catfish" Cole was the organizer of the Klan rally. Sanford Locklear, Simeon Oxendine and Neill Lowery were leaders of the Lumbee who attacked the Klansmen and successfully disrupted the rally.

Events leading up to the confrontation

In reaction to the US Supreme Court ruling in 1954 ending official public school segregation, the revived Ku Klux Klan (KKK) undertook a campaign of terrorist actions throughout the American South designed to intimidate black people and discourage them from demanding greater civil rights.[1] Cole led the South Carolina-based Knights of the Ku Klux Klan.

In 1957, Cole began a campaign of harassment designed to intimidate the Lumbee Tribe.[2] He hoped to use his campaign against the Lumbee to build up the Klan organization in North Carolina.[1]

Believing that he had the Lumbee on the run, Cole announced plans for a Klan rally on January 18, 1958, near the small town of Maxton, intended "to put the Indians in their place, to end race mixing."[3] 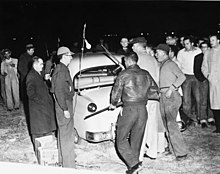 On the night of the rally, 50–100 Klansmen arrived at the private field near Hayes Pond which Cole had leased from a sympathetic farmer. Cole set up the public address system and erected the cross, all under the illumination of a single light bulb. Before Cole could finish the arrangements, over 500 Lumbee men, many armed with rocks, sticks and firearms, appeared and encircled the assembled Klansmen.[2]

Afterward, the Lumbee celebrated by holding up the abandoned KKK banner; Charlie Warriax and World War II veteran Simeon Oxendine were shown wrapped in it in Life magazine photos.[4]

In the days after the confrontation, a defiant Cole called the Lumbee "lawless mongrels" and denounced local law enforcement for failing to intervene earlier in the confrontation.[5] Public opinion, however, turned against Cole. North Carolina Governor Luther H. Hodges denounced the Klan in a press statement, and Cole was later convicted for inciting a riot and given a two-year sentence.[2]

There are also two markers; one an engraved rock at the Lumbee tribe federal office, and a highway marker at the intersection of South Patterson Street (34.7223547, -79.3531393) and Maxton Pond Road.

The Maxton Pond Road is overgrown (in the part that goes by the pond itself) and the bridge is destroyed.[citation needed]