Basavaraj Somappa Bommai (born 28 January 1960) is an Indian politician and mechanical engineer who is the current and 23rd Chief Minister of Karnataka. He is Member of Legislative Assembly in the legislature of Karnataka for Shiggaon, from where he has been elected three times since 2008. He is a member of the Bharatiya Janata Party.

Bommai is the son of the former Chief Minister of Karnataka and Union Minister of Human Resource Development S. R. Bommai, who is widely remembered as the champion for the landmark judgment of the Supreme Court of India, S. R. Bommai v. Union of India.[1][2][3] Basavaraj Bommai and his father are only the second father and son duo after H. D. Devegowda and H. D. Kumaraswamy to become the Chief Ministers of Karnataka.[4]

Bommai was born on 28 January 1960 to former Chief Minister S. R. Bommai and Gangamma in Hubli, Mysore State (present-day Karnataka).[6] Bommai is a graduate Mechanical Engineer from B.V. Bhoomaraddi College of Engineering and Technology (presently KLE Technological University), and started his career with Tata Motors in Pune. He is also an agriculturist and industrialist by profession. He is married to Chennamma and has two children.[7] He belongs to Sadar Lingayat community.[8]

Bommai was elected as a member of the Karnataka Legislative Council, twice (in 1998 and 2004) from Dharwad local authorities constituency.[9] He served as a political secretary to then Chief Minister J. H. Patel.[10] He left the Janata Dal (United) and joined the Bharatiya Janata Party in February 2008.[11]

In the 2008 Karnataka state elections, he was elected to the Karnataka Legislative Assembly from Shiggaon constituency in Haveri district. He was considered as a close aide of the then Chief Minister B. S. Yediyurappa.[12] 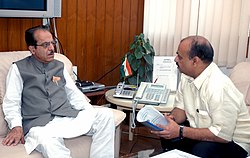 In February 2008, he left Janta Dal (United) and joined  Bharatiya Janata Party. The same year he was elected to Karnataka Legislative Assembly from Shiggaon constituency. Between 2008 and 2013 Bommai served as Minister for Water Resources under Chief Ministers B. S. Yediyurappa, Sadananda Gowda and Jagadish Shettar.

Bommai is widely acclaimed for his contributions to irrigation schemes and deep knowledge regarding irrigation matters in Karnataka. He is also credited with implementing India's first 100% piped irrigation project at Shiggaon in Haveri district of Karnataka.[13][14]

In the Fourth Yediyurappa ministry he held key ministerial portfolios, serving as Minister of State for Home Affairs, Law and Parliamentary Affairs and as Minister for Cooperation. He also served as Minister in charge of Haveri and Udupi districts.

In December 2019, a protest against the Citizenship Amendment Act in Mangalore turned into violence and riots when a mob of protesters attempted to lay siege to the Mangalore North police station and tried to attack cops. Section 144 was imposed by the Police department around the areas of the riots. Later two people were killed in Mangalore in police firing after protests against the Citizenship Amendment Act turned too violent.[15] The Home Minister Bommai set-up a team and ordered probe into this matter. Over 60 people were identified and detained by the cops after the December 19th violence. The Karnataka government also suspended mobile Internet services in Dakshina Kannada district in Mangaluru for few hours in the wake of violence.[16][17]

The 2020 Bangalore riots on the night of 11 August and the early hours of 12 August 2020, violent clashes took place in the Indian city of Bangalore, Karnataka. Provoked by an inflammatory Facebook post on Muhammad that was allegedly shared by the nephew of the Akhanda Srinivas Murthy, a state legislator of the Indian National Congress,[18] a group of Muslims arrived at his house in protest which later turned violent. The protest turned into a violent riot after the house of sitting MLA Akhanda Srinivas Murthy was set to fire. [19][20] Further the clashes between the police and the mobs started around the residence of the legislator and spread to the police stations of KG Halli and DJ Halli. The incident resulted in the imposition of a curfew in the affected areas. 3 people were killed after police opened fire on the crowds. 30–80 policemen and several journalists,[21] were injured by armed assailants. Murthy's property was torched during the period of violence. The following day, over 100 people were arrested by the police. Some of the crowds were also allegedly led by members of the Social Democratic Party of India (SDPI), and has led to the arrest of a few of its leaders.[22] The Home Minister Bommai ordered a detailed investigation and assured compensation for damaged property be forcibly provided by known participants in the riots, a policy proposed by Yogi Adityanath-led Uttar Pradesh following anti-CAA protests there. [19]

During the second wave of the COVID-19 pandemic in Karnataka, Bommai, as Home Minister, imposed strict lockdown regulations.[23] Bommai converted his residence at Shiggaon in Haveri district into a Covid Care Centre that could accommodate up to 50 patients, to reduce the burden on the Shiggaon taluk hospital. He also appointed doctors and medical staff to take care of the patients along with oxygen concentrators.[24][25]

B. S. Yediyurappa resigned as Chief Minister on 26 July 2021, on the second anniversary of his term. Dharmendra Pradhan and G. Kishan Reddy were sent by the national leadership of the BJP to carry out the selection of the next chief minister. On 27 July 2021, Bommai was elected to the post.[26][27][28] He was sworn in the next day as the 23rd Chief Minister of Karnataka, becoming the fourth chief minister from the Bharatiya Janata Party in the state.[29] On his very first day as the Chief Minister, after the cabinet meet he announced scholarships for higher education to farmers' children. He also increased the pensions of widows, physically challenged and senior citizens of the state.[30][31]