Russian tennis player
In this Eastern Slavic naming convention, the patronymic is Kazbekovich and the family name is Karatsev.

In February 2021, Karatsev went through qualifiers for the Australian Open. In his first main draw of a Grand Slam, ranked 114th, he defeated 8th seed Diego Schwartzman, 20th seed Félix Auger-Aliassime and 18th seed Grigor Dimitrov to reach the semifinals. Karatsev is the first man in the Open Era to reach the semifinals in his Grand Slam debut.[1]

In March 2021, he won his first ATP title at the 2021 Qatar Open with Andrey Rublev in doubles.[2] A week later, Karatsev, as a wildcard, won his first ATP singles title at the 2021 Dubai Open, beating South African Lloyd Harris in the final. Karatsev, who was unseeded and beat four seeded players to reach the final, joined Wayne Ferreira (1995) and Thomas Muster (1997) in this achievement.[3] As a result, he entered the top 30 of the ATP singles rankings for the first time in his career.[4] On 24 April 2021, Karatsev defeated World No. 1 Novak Djokovic on his home court at the Serbia Open for the biggest win of his career.[5] 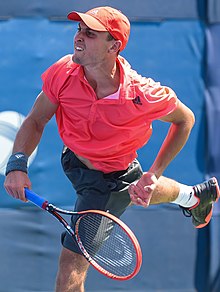 Karatsev was born 4 September 1993 in Vladikavkaz. His father Kazbek Karatsev is an ethnic Ossetian and former footballer, and his mother Svetlana Karatseva is a medical doctor. Aslan has an older sister named Zarina.[6][7] Karatsev's grandfather on his mother's side is Jewish.[8][9] When he was three years old his parents moved to Israel.[10]

His first coach was Vladimir Rabinovich.[10] When he was 12, he moved back to Russia, with his father, because of funding limitations in Israel. This time he moved to Taganrog where his new coaches were Alexander Kuprin and Ivan Potapov. From 2011 to 2013 he was coached by Andrey Kesarev.[11]

Karatsev made his ATP main draw debut at the 2013 St. Petersburg Open where he received entry to the main draw as a wildcard entrant. In the first round he lost to compatriot and second seed Mikhail Youzhny, 7–6(7–5), 2–6, 2–6. In the doubles event, he partnered Dmitry Tursunov where they reached the semifinals, losing to Dominic Inglot and Denis Istomin, 4–6, 7–5, [9–11]. In 2015 he won his first ATP match in the main draw at the 2015 Kremlin Cup, defeating Youzhny.[13]

According to Karatsev's father, his son, at 19, had been mentored by Dmitry Tursunov who traveled him to Halle, Germany to train there for a couple of months but returned due to a lack of money to continue. Then the German academy itself invited Aslan to return to Halle. He had been trained there for two years, then got injured and could not really play for two years because of the trauma. He moved to Barcelona. There he had played at the Bruguera Tennis Academy for less than two years.[14]

After searching for better coaching opportunities in Spain and Germany, in 2019 Karatsev hired his new coach, Yahor Yatsyk from Minsk. Yatsyk, a former professional tennis player one year his senior,[15] used to help Nikoloz Basilashvili as a coach.[16] During the COVID-19 lockdown Karatsev played exhibition matches in the United States.

Karatsev made his Grand Slam debut at the 2021 Australian Open after coming through qualifying by beating Brandon Nakashima, Max Purcell and Alexandre Müller. It was here that he also notched his first top-10 victory, after upsetting 8th seed and world No. 9 Diego Schwartzman, in a rare match between two Jewish players. He also upset 20th seed Félix Auger-Aliassime after dropping the first two sets and coming back to win in 5 to become the first qualifier to reach a Grand Slam quarterfinal since Bernard Tomic at Wimbledon 2011, and the first man to reach a quarterfinal in his Grand Slam debut since Alex Rădulescu in 1996 Wimbledon.[17][18] He then defeated the former No. 3 player Grigor Dimitrov in four sets to reach the semifinals.[19] By doing this, Karatsev became the first qualifier to reach the semifinals of a Grand Slam since Vladimir Voltchkov in 2000 Wimbledon and the first to do so at the Australian Open since Bob Giltinan in 1977, the lowest-ranked player to reach a Grand Slam semifinal since Goran Ivanišević in 2001 Wimbledon, and the first player to reach a Grand Slam semifinal on debut in the Open Era history.[1][20] There, he lost to world No. 1 and eventual champion Novak Djokovic in straight sets.[21][22] His run at the tournament raised his ranking from World No. 114 to a career-high of World No. 42.

Karatsev's next tournament was Doha, where he beat Mubarak Shannan Zayid in straight sets in the first round, but lost to top seed Dominic Thiem in the second round after taking the first set in a tiebreak. He entered the doubles draw with compatriot Andrey Rublev and reached the semifinals, where they defeated Jérémy Chardy and Fabrice Martin. In the final, they defeated Marcus Daniell and Philipp Oswald in straight sets. Winning the tournament raised his doubles ranking from No. 447 to a career-high of No. 222. In Dubai, he beat Egor Gerasimov, Dan Evans and Lorenzo Sonego to reach his first ATP 500 quarterfinal, where he beat Jannik Sinner in three sets to advance to his first ATP 500 semifinal. In the semifinal, Karatsev ended the 23-match winning streak of second seed Andrey Rublev at ATP 500 events to reach his first singles final. In the final, he defeated Lloyd Harris to win his first title. The win allowed Karatsev to break into the top 30 for the first time in his career. He has become the second Russian tennis player to win his maiden title at 27, a record shared with Igor Kunitsyn.[23]

At the Serbia Open, Karatsev avenged his loss at the Australian Open by defeating world No. 1 Novak Djokovic, to advance to the final in the longest match of 2021 thus far.[24] He was then defeated by Matteo Berrettini in three sets.[25]

At the 2021 French Open, Karatsev lost in men's singles to Philipp Kohlschreiber in the second round. However, he partnered with Elena Vesnina in mixed doubles and advanced to the final, but the pair lost to Joe Salisbury and Desirae Krawczyk.

Current through the 2021 French Open.