Army of Thieves is a 2021 heist comedy film directed by Matthias Schweighöfer from a screenplay by Shay Hatten, based on a story he wrote with Zack Snyder. A prequel to Army of the Dead, it is the second installment in the Army of the Dead franchise; the film stars Schweighöfer, who reprises his role as Ludwig Dieter, alongside a supporting cast that includes Nathalie Emmanuel, Ruby O. Fee, Stuart Martin, Guz Khan, and Jonathan Cohen.

Filming began in Germany and the Czech Republic in October 2020, and concluded by December 2020.[1][2] Army of Thieves was digitally released on October 29, 2021, on Netflix. It received generally positive reviews from critics.

Sebastian has a mundane life as a bank teller in Potsdam. A zombie outbreak in Nevada dominates international news, giving him nightmares about zombies. He also produces YouTube videos about safecracking that receive no attention until a mysterious figure comments on his most recent, inviting him to an underground safecracking competition. Sebastian goes, winning the contest. Gwendoline then introduces herself, a skilled jewel thief who had commented upon his YouTube video.

Gwendoline recruits Sebastian into a heist crew consisting of herself, expert hacker Korina, getaway driver Rolph and gunman Brad Cage with the intention of breaking into three banks that have the three safes created by legendary locksmith Hans Wagner, which currently belong to billionaire Bly Tanaka. The safes are due to be decommissioned in less than a week, so time is running out for someone to break into them.

Sebastian, a theoretical expert on Wagner's work and safecracking but with no practical experience, is convinced by Gwendoline to join them for the challenge of breaking into a Wagner safe. Together, the crew successfully undertakes their heist of the first safe in Paris, escaping with only a fraction of the money that is actually in the safe. Gwendoline justifies this as the challenge and reputation is better than any major monetary gain.

As the crew celebrate after the Paris heist, Sebastian develops feelings for Gwendoline, drawing jealousy from Brad, her boyfriend since their teenage years when his real name was Alexis. The crew travel to Prague the location of the second safe, and are followed by Delacroix, an obsessive Interpol agent leading a unit that has been trying to capture Gwendoline and the crew for years after Brad shot him during a theft.

Sebastian and Gwendoline enter the bank but are soon identified by security, forcing Brad to create a distraction with a pretend robbery. He cracks the second safe, leaving with Gwendoline and another haul of money as Delacroix and his team race to the bank to stop them. Brad is shot in the shoulder by a security guard and narrowly escapes the bank, ahead of Sebastian and Gwendoline. As the team flee, Brad deliberately leaves Sebastian behind, forcing him to shake off the pursuing police alone.

Angry at Brad’s actions, Gwendoline and Korina leave the crew, although the original plan was to ditch Sebastian after the three heists were complete. The women head back to Potsdam and reunite with Sebastian, telling him that the pursuit of the Wagner challenge is more important to them than any monetary gain.

The trio head to St. Moritz, location of the last safe in Europe, whilst Interpol also arrives. Delacroix’s team believe they have a lead on the theft, only to be tricked again by them. They hijacked the safe during its transfer from the casino. Their hijacking also usurps Brad and Rolph's idea to rob the safe themselves.

Gwendoline and Sebastian leave St. Moritz on a lorry, chased by Brad and Rolph. Korina, caught by Interpol, manages to warn them about the other two. Sebastian has to crack the safe in the lorry while they are pursued by Brad and Rolph, and Interpol. He succeeds, finding another large haul of cash. Before they can leave with it however, Rolph and increasingly unstable Brad arrive. She overpowers and handcuffs them to the truck for Interpol to find before leaving with Sebastian.

Before escaping on a boat from the town of Hallstatt, Austria, Sebastian and Gwendoline confess their mutual feelings. However, Delacroix catches them, resulting in a standoff between him and Gwendoline. Out of love for Sebastian, she sacrifices herself to be arrested so that he can escape, promising to find him once she is free. Sebastian goes, vowing he will be reunited with Gwendoline one day.

Some time later, Scott Ward and Maria Cruz find Sebastian's (now Ludwig's) locksmith shop in California. They offer him the chance to crack Wagner's legendary "missing" safe, which Gwendoline and Sebastian had resolved to crack together once she was free; Ludwig accepts the job.

Additionally, Amy Huck makes a cameo role as Lady Café, while Peter Simonischek appears uncredited as a locksmith at Dieter’s shop. Reprising their roles uncredited and appearing in extended archive footage from Army of the Dead are Dave Bautista and Ana de la Reguera as Scott Ward and Maria Cruz, respectively, while Hiroyuki Sanada appears as Bly Tanaka through a still image. 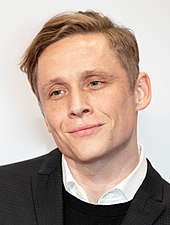 In September 2020, it was announced that the film, then known as Army of the Dead: The Prequel, was in development at Netflix.[3] Filming took place in Germany and the Czech Republic, and finished in December 2020.[4][5] In a February 2021 interview, Deborah Snyder referred to the film as Army of Thieves.[6] That same month, Army of the Dead composer Tom Holkenborg confirmed that he would be working on both the prequel and the tie-in animated series Army of the Dead: Lost Vegas.[7] In April 2021, Zack Snyder confirmed the official title.[8] In August 2021, Matthias Schweighöfer announced on Twitter that Hans Zimmer and Steve Mazzaro will serve as composers for the film, replacing Holkenborg.[9]

In May 2021, Deborah Snyder described the film as similar to The Italian Job in a world where zombies exist, while explaining that the film is standalone in nature. The producer classified the genre as a romantic comedy heist film that canonically depicts the early stages of the zombie pandemic portrayed in the previous film; stating: "[it] takes place in a world where these zombies exist in America and it’s causing instability in the banking institutions. They’re moving money around, so it’s the perfect opportunity for a heist." The plot will center around Schweighöfer's character Ludwig Dieter, showing how he learned to crack safes with previous heist teams.[10] Schweighöfer acknowledged that while the movie isn't categorically a zombie film, the filmmaker teased that the undead may appear;[11] while Snyder confirmed that there will be zombies in the film.[12]

On July 25, 2021, Netflix unveiled its first teaser trailer for the film which premiered at the San Diego Comic-Con.[13] In the special panel, the team discussed the upcoming prequel as producer Deborah Snyder said; "Who's done a prequel where it's a different genre of film? To me this is more of a romantic, comedy, heist film than anything else. It just happens to live in this world where zombies are in the U.S. and it's causing the banking system some instability."[14]

On the review aggregator website Rotten Tomatoes, 71% of 78 reviews are positive, with an average rating of 6.10/10. The website's critics consensus reads: "Army of Thieves doesn't reinvent the heist thriller, but director-star Matthias Schweighöfer proves an appealing presence on both sides of the camera."[16] According to Metacritic, which assigned a weighted average score of 49 out of 100 based on 22 critics, the film received "mixed or average reviews".[17]

Gayle Sequeira of Film Companion wrote, "This prequel to Army of the Dead gives one of its minor characters a showcase of his own, and a pretty delightful one at that."[18]

Army of Thieves was the most-watched film on Netflix during its debut weekend[19] and was ranked first on Netflix in more than 90 countries shortly after its release.[20] Samba TV estimated that it was watched by 770,000 households in the United States.[21] It was also the third most-watched film overall in the United States during the week according to TV Time.[22] In the second week, it rose to the second rank on TV Time's charts.[23]