Ariana DeBose (/ˌɑːriˈɑːnə dəˈboʊz/;[1] born January 25, 1991) is an American actress, singer, and dancer. She is the recipient of various accolades, including an Academy Award, a British Academy Film Award, a Screen Actors Guild Award, and a Golden Globe Award, in addition to a nomination for a Tony Award.

DeBose made her television debut competing on So You Think You Can Dance in 2009. She then made her Broadway debut in the musical Bring It On: The Musical in 2011 and appeared in further Broadway roles in Motown: The Musical in 2013 and Pippin in 2014. She also appeared as The Bullet in the original cast of Hamilton from 2015 to 2016 and as Jane in A Bronx Tale from 2016 to 2017. In 2018, she was nominated for the Tony Award for Best Featured Actress in a Musical for her role as Donna Summer in Summer: The Donna Summer Musical.

DeBose also appeared in the filmed stage recording of Hamilton, which was released in 2020 on Disney+. She played Alyssa Greene in Netflix's The Prom (2020) and Emma in the Apple TV+ musical comedy series Schmigadoon! (2021). DeBose garnered widespread recognition and critical praise with her role as Anita in Steven Spielberg's film adaptation of West Side Story (2021), earning her the Academy Award for Best Supporting Actress.

DeBose was born on January 25, 1991, in Wilmington, North Carolina. Her mother, Gina DeBose, is an 8th grade teacher.[2] DeBose trained in dance at CC & Co. Dance Complex in Raleigh.[3] DeBose has stated that her father is Puerto Rican and her mother is white, and that she also has African-American and Italian ancestry.[4]

DeBose made her television debut in 2009, when she competed on the TV series So You Think You Can Dance, making it into the Top 20.[5] She later appeared on the soap opera One Life to Live and played Inez in the North Carolina Theatre's production of Hairspray before appearing in the role of Nautica in the 2011 Alliance Theatre production of Bring It On. She also appeared in the ensemble of the New York Philharmonic production of Company, which was filmed for television.[6] At the end of 2011, Bring It On embarked on a national tour across the United States. DeBose continued her role into the 2012 Broadway production and understudied the character Danielle.

In 2013, DeBose played Mary Wilson in Motown on Broadway, understudying the role of Diana Ross.[6] She later joined the cast of Pippin on Broadway, playing a noble and a player and understudying the role of the Leading Player, which she ended up taking over for a short period in 2014.[6] She can be heard playing director/choreographer Zoey Taylor in As the Curtain Rises, an original Broadway soap opera podcast from the Broadway Podcast Network.

In 2015, DeBose left Pippin to join the ensemble of the off-Broadway musical Hamilton. The show moved to Broadway later that year. She left Hamilton in July 2016 and made a guest appearance on the TV series Blue Bloods as Sophia Ortiz. She also starred as Daphne in the thriller film Seaside. From November 2016 to August 2017, DeBose portrayed Jane on Broadway in A Bronx Tale.[7]

In late 2017, DeBose received her breakthrough role, playing Disco Donna in Summer: The Donna Summer Musical at San Diego's La Jolla Playhouse. She reprised this role in the Broadway production, which opened in April 2018.[8] She was nominated for the 2018 Tony Award for Best Featured Actress in a Musical.[9] 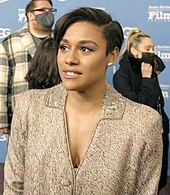 DeBose played Alyssa Greene in the film adaptation of The Prom, directed by Ryan Murphy.[citation needed] In March 2021, DeBose released a dance-pop recording and video of Rodgers & Hammerstein's "Shall We Dance" for the album R&H Goes Pop, produced by Justin Goldner and arranged by Benjamin Rauhala.[10] In 2021, DeBose played Emma Tate in the parody musical comedy series Schmigadoon! on Apple TV+.[11] She will also star in the spy film Argylle for the service.[12]

Despite initially not seeing herself playing the role and refusing to audition for it,[13] DeBose played Anita in the 2021 film adaptation of the musical West Side Story, directed by Steven Spielberg. The film was released in December 2021 to critical acclaim.[14] DeBose herself received critical attention for her performance of Anita,[15][16] with Caryn James of BBC praising her performance, declaring, "Anita, in a layered, dynamic performance by Ariana DeBose, is the centre of attention, swirling her skirt and dancing to the Latin rhythms that infuse the film."[17] David Fear of Rolling Stone wrote, "DeBose...strong contender for Most Valuable Player here, whose energy—in her singing, her dancing, her line-reading, her side-eyeing—could power a metropolitan block."[18] She also received multiple accolades, including a Golden Globe Award, a BAFTA Award, a Critics' Choice Movie Award, and a Screen Actors Guild Award, making her the first Afro-Latina and openly queer woman of color to win the latter award,[19] and the Academy Award for Best Supporting Actress.

In December 2020, DeBose and Jo Ellen Pellman launched the Unruly Hearts Initiative. The initiative was created to help young people connect with organizations and charities that advocate for the LGBTQ+ community.[25]