Early Mormon and later a critic of polygamy 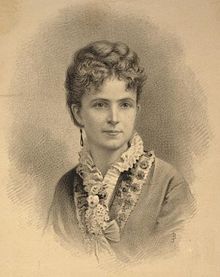 Ann Eliza Young (September 13, 1844 – December 7, 1917) also known as Ann Eliza Webb Dee Young Denning[1] was one of Brigham Young's fifty-five wives and later a critic of polygamy.[2] She spoke out against the suppression of women and was an advocate for women's rights during the 19th century.[3]

Ann Eliza Webb was born in Nauvoo, Illinois, to Chauncey Griswold Webb and his wife Eliza Jane Churchill.[1] The Webb family moved to the Salt Lake Valley with the Mormon pioneers.

Ann Eliza married James Dee monogamously on April 4, 1863, in Salt Lake City, Utah Territory. They had two children together and later divorced.[2] According to her biographer Irving Wallace, "for the rest of her days Ann Eliza would always refer to James Dee as the man who 'blighted' her life."[4] 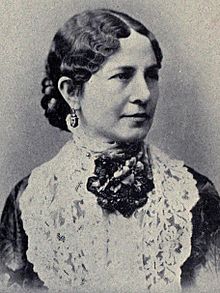 On the advice of her family, Ann Eliza married Brigham Young, the second president of The Church of Jesus Christ of Latter-day Saints (LDS Church), when he was 67 years old and she was a 24-year-old divorcee.[2]

Although Ann Eliza later called herself Young's "wife no. 19," others have referred to her as his "27th wife." One researcher concluded that she was actually the 52nd woman to marry Young.[5] The discrepancies may be due, in part, to difficulties in defining what constitutes a "wife" in early Mormon polygamous practices. An official LDS Church book titled, Pictures and Biographies of Brigham Young and His Wives, provides brief descriptions of 26 wives.

Ann Eliza filed for divorce from Young in January 1873, an act that attracted much attention. Her bill for divorce alleged neglect, cruel treatment, and desertion, and claimed that her husband had property worth $8 million and an income exceeding $40,000 a month. Young countered that he owned less than $600,000 in property and that his income was less than $6,000 per month.[6]

Ann Eliza was excommunicated from the LDS Church on 10 October 1874.[5][7] The divorce was granted in January 1875 and Brigham Young was ordered to pay a $500 per month allowance and $3,000 in court fees.[5] When Young initially refused, he was found in contempt of court and sentenced to a day in jail and a $25 fine.[5] The alimony award was later set aside on the grounds that the marriage was polygamous and therefore legally invalid; the polygamous nature of the marriage also exposed them to potential indictments for unlawful cohabitation.[5]

Ann Eliza subsequently traveled the United States and spoke out against polygamy, Mormonism, and Brigham Young.[8] She testified before the U.S. Congress in 1875; these remarks were credited, by some,[who?] to have contributed to a passage of the Poland Act (1874)[citation needed] that reorganized the judicial system of Utah Territory and made it easier for the federal government to prosecute polygamists.[3]

In 1876, Ann Eliza published an autobiography titled Wife No. 19. In it, she wrote that she had "a desire to impress upon the world what Mormonism really is; to show the pitiable condition of its women, held in a system of bondage that is more cruel than African slavery ever was, since it claims to hold body and soul alike."[3] Her account of the "horrors of polygamy and masonry" is available from various sources.[9][10] The autobiography was the basis for Irving Wallace's 1961 biography The Twenty-Seventh Wife and for David Ebershoff's 2008 novel The 19th Wife.

After her divorce from Brigham Young in 1875,[5] Ann Eliza married 53-year-old Moses R. Denning of Manistee, Michigan,[5] a non-Mormon and wealthy logger known to have only one arm.[11][12] Two years prior to her marriage to Denning, Ann Eliza stayed at the home of Denning, who at the time was married with children.[12] Ann Eliza scaled back her crusade against Mormonism and polygamy and stopped delivering lectures the week she married Denning.[11][13] She eventually became estranged from her family, including her children; a grandson told Wallace that neither of her sons had contact with her after they reached early adulthood. In 1930, her older grandson told Wallace, "I hope to hell I never see her again."[14]

A 1907 article on the 30th anniversary of Young's death updated the public on his then-surviving widows and stated that Ann Eliza was divorced for the third time and living in Lansing, Michigan. The 1900 U.S. census had reported her living in Breckenridge, Summit County, Colorado.[15] Ann Eliza eventually returned to Utah to claim a $2,000 legacy from her first husband, whom she had previously described as the "blight of my life."[13]

In 1908, she published a revised version of Wife No. 19 titled Life in Mormon Bondage, a revision that excluded any mention of her first marriage to Dee or her third marriage to Denning. By 1910, she had moved to Sparks, Nevada.[16] She died at her home in Sparks of pneumonia related to old age[17] and was buried December 9, 1917, in Mountain View Cemetery, Reno, Nevada.[18]