Plummer was born March 23, 1957 in New York City, the only child of Canadian actor Christopher Plummer and American actress Tammy Grimes.[1][2][3] Christopher Plummer said that he and Grimes named their daughter Amanda Michael after Amanda Coward, a character from the play Private Lives, and the actress Michael Learned.[4] She attended the elite Trinity School before graduating from the United Nations School of Performing Arts. She attended Middlebury College for two and a half years and, as a young adult, studied acting at the Neighborhood Playhouse School of the Theatre in New York City.[5]

Plummer has received critical acclaim for her film work, including such films as Cattle Annie and Little Britches (1981), The World According to Garp (1982), Daniel (1983), and The Hotel New Hampshire (1984). Other films of note include The Fisher King, for which she received a BAFTA film nomination (1992), a Chicago Film Critics Association Award nomination (1992), and a Los Angeles Film Critics Association Award (1992).

Other films include Pulp Fiction, for which she received an American Comedy Award nomination; Girlfriend; Butterfly Kiss, My Life Without Me; Vampire, and Ken Park. She made her Broadway debut as Jo in the 1981 revival of A Taste of Honey, which ran for almost a year with Valerie French playing Helen, Jo's mother. She received a Tony Award nomination, a Theatre World, a Drama Desk, and an Outer Critics Circle Awards for her portrayal. 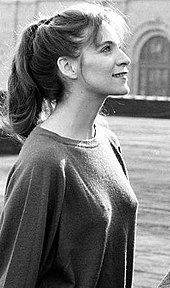 She won a Tony Award for Featured Actress and the Drama Desk, Outer Critics Circle and Boston Critics Circle Awards for her portrayal of Agnes in Agnes of God, with Geraldine Page and Elizabeth Ashley.[6] In 1983 she portrayed Laura Wingfield in a Broadway revival of The Glass Menagerie. Other Broadway performances include Dolly Clandon in You Never Can Tell (1986), and as Eliza Doolittle in Pygmalion (1987; for which she received her third Tony Award nomination, this time for Best Performance by a Leading Actress in a Play.)[7]

Off-Broadway plays include Beth in Sam Shepard's A Lie of the Mind, and Killer Joe, written by Tracy Letts. She has performed in many of Tennessee Williams' plays, including Summer and Smoke, The Gnädiges Fräulein, The Milk Train Doesn't Stop Here Anymore, and the world premiere of The One Exception.[8]

In 1996, Plummer won an Emmy Award for her guest appearance on the episode "A Stitch in Time" of The Outer Limits.[9] In 2005, she won an Emmy as Miranda Cole in the Law & Order: Special Victims Unit episode "Weak", in which she played a woman with schizophrenia.[10]

Plummer played Wiress, a former "tribute" who won the Hunger Games, in The Hunger Games: Catching Fire (2013), the film adaptation of the second novel of The Hunger Games trilogy, by Suzanne Collins.[11] Plummer starred alongside Brad Dourif in the critically acclaimed Off Broadway revival of Tennessee Williams' The Two-Character Play at New World Stages in 2013.[12][13]

In 2020, Plummer was featured in the Netflix drama series Ratched.[14]

Plummer dated screenwriter and director Paul Chart in the late 1990s.[15] The two lived together in Los Angeles[16] and worked together on Chart's film American Perfekt.[17]