Allison Christin Mack (born July 29, 1982) is an American actress. She portrayed Chloe Sullivan on the WB/CW superhero series Smallville (2001–2011), where she appeared in all 10 seasons. Mack was also featured in a recurring role on the FX comedy series Wilfred (2012; 2014).

Outside of her acting career, Mack was a member of NXIVM, a sex cult posing as a multi-level marketing company. In 2018, she was arrested on charges of sex trafficking, sex trafficking conspiracy, and forced labor conspiracy in relation to NXIVM activities. She pleaded guilty to racketeering charges and was sentenced to three years in prison in 2021.[1]

Allison Mack was born on July 29, 1982 in Preetz, West Germany,[2][3][4] to Jonathan Mack, an opera singer, and Mindy Mack, a schoolteacher and bookkeeper.[3][4] Her American parents were in Germany at the time of her birth because Jonathan was performing there; they lived in Germany for two years before moving to California.[5]

Mack's first job was for a German chocolate company in a series of print ads and commercials. Mack recalled that her "very first job was a commercial for German chocolate and it was all in German. . . I wasn't allowed to swallow the chocolate. I would take a bite and then at the end of every take I'd have to spit it out. That was very frustrating, especially for a kid."[5] She went into modeling for a short period,[6] and studied at the Young Actors Space in Los Angeles at age seven.[2]

Mack's first major television role was an episode of the WB series 7th Heaven, in which she gained attention playing a teenager who cut herself. In 2000, she co-starred in the short-lived series Opposite Sex. Her film credits include roles in Eric Stoltz's directorial debut My Horrible Year! as a girl having great difficulties in her life as she turns 16. She was also featured in Camp Nowhere and in the Disney film Honey, We Shrunk Ourselves. 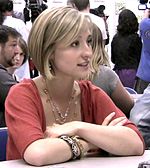 In October 2001, Mack began starring as Chloe Sullivan, one of Clark Kent's best friends, in the WB/CW hit series Smallville; Chloe, an original character created for the show, was eventually introduced into DC Comics in 2010. Mack earned several awards and nominations for her portrayal of Chloe, including the Teen Choice Award for Best Sidekick in 2006[7] and 2007.[8] She appeared as a series regular for nine seasons, and returned as an intermittent main cast member in the tenth season, including the two-part series finale. From 2003 to 2004, Mack's character appeared in her own miniseries, Smallville: Chloe Chronicles, and in 2006, Smallville: Vengeance Chronicles. In November 2008, Mack made her directorial debut in Smallville season 8 episode 13 titled "Power",[9] which aired January 29, 2009.

In 2002 she made a couple of appearances along with her Smallville castmate Sam Jones III in R. L. Stine's miniseries The Nightmare Room. In 2006, Mack voiced the sister of the main character in the Warner Bros. CG-animated movie The Ant Bully. That same year, she voiced Clea, a museum curator, in an episode of The Batman. Adding to her Superman resume, she lent her voice for Power Girl in the Warner Premiere animated feature, Superman/Batman: Public Enemies, in September 2009.[10] Since May 2009, Mack has been part of a project with the Iris Theatre Company.[11]

In March 2012, Mack was cast in a recurring role in the second season of the FX sitcom Wilfred. She played Amanda, the love interest of Elijah Wood's lead character Ryan. Mack returned to Wilfred for one episode of the fourth and final season.[12] In 2014, Mack guest-starred as a policewoman named Hilary in an episode of the Fox thriller The Following. On March 21, 2015, she tweeted that she would be appearing in American Odyssey as Julia, who befriends Suzanne, the daughter of Anna Friel's lead character Sgt. Odelle Ballard.[13]

Mack had a long-term relationship with actor Chad Krowchuk during the 2000s.[14] Mack married actress Nicki Clyne in February 2017. The marriage was alleged to have been a sham to get around US immigration laws, and only became public a year later during legal proceedings on the conspiracy and racketeering charges as part of her involvement with NXIVM.[15][16][17] It was also alleged that Mack, along with another former high-ranking NXIVM member Lauren Salzman, were NXIVM founder Keith Raniere's sexual partners.[18] 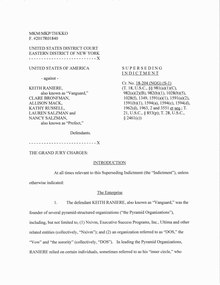 The indictment of Mack and other NXIVM members

In 2010, Mack was reported to have been recruited to the Vancouver chapter of the multi-level marketing organization NXIVM, along with her Smallville co-star Kristin Kreuk.[22] In a 2003 article from Forbes, advocates of NXIVM portrayed it as an organization focused on inspirational executive coaching, "like a practical MBA", while detractors accused the founder Keith Raniere of running "a cult-like program aimed at breaking down his subjects psychologically".[attribution needed][23] The group had a practice of branding their victims, a ritual created by Mack.[24]

Former NXIVM member Sarah Edmondson stated in a 2017 New York Times exposé and a 2018 A&E special on cults that Mack recruited her into an enclave within NXIVM, "Dominus Obsequious Sororium" (DOS), and that she had been branded in an initiation ceremony at Mack's house, under Mack's supervision.[25][26] By one account, some women appeared to have been branded with Mack's initials (AM) and Raniere's initials (KR).[24]

Mack was arrested in Brooklyn by the FBI on April 20, 2018, on charges of sex trafficking, sex trafficking conspiracy and forced labor conspiracy.[27][28] During her arraignment proceedings, prosecutors also accused her of entering a sham marriage with Nicki Clyne to help Clyne circumvent US immigration laws.[17][15][29][30] According to prosecutors, after she recruited women to join the organization, she used tactics such as blackmail to force them into engaging in sexual activity with Raniere against their wishes and enslaved them to do menial tasks, for which Raniere allegedly paid Mack. Mack is said to be second-in-command of NXIVM after Raniere.[31][32][33]

On April 24, 2018, Mack was released on a $5 million bond and held under house arrest under the custody of her parents in California.[34] She was charged with recruiting women into "DOS" or "The Vow", a sex cult propagated by NXIVM that presented itself as a women's self-help group.[35][36][37][38] If convicted of all charges, Mack and Raniere faced imprisonment for a minimum of 15 years.[39][40][41] In March 2019, it was revealed in court that Mack and the other defendants in the case were in "active plea negotiations" as Raniere appeared in court to plead not guilty to child pornography charges related to the case.[42] On April 8, 2019, Mack pleaded guilty to racketeering conspiracy and racketeering charges, and was scheduled for sentencing in September 2019.[43][44] The sentencing was postponed by the court to grant sufficient time to conduct pre-sentencing investigations.[18]

In 2019, Catherine Oxenberg produced the Lifetime television film Escaping the NXIVM Cult: A Mother's Fight to Save Her Daughter with actress Sara Fletcher as Mack.[45] On October 27, 2020, Raniere was sentenced to 120 years in prison.[46]

Mack faced a minimum of 15 years to life in prison.[47] Days before the sentencing, Mack released a statement saying that her involvement was "the biggest mistake and regret of [her] life" and expressed remorse in regards of those affected. In addition to the letter, her attorneys asked for no jail time in consideration for Mack's remorse and her cooperation with Raniere's prosecution.[48] On June 30, 2021, Mack was sentenced to three years in federal prison and was ordered to pay a fine of $20,000.[49][50]