Aligarh Muslim University (abbreviated as AMU) is a public central university in Aligarh, India, which was originally established by Sir Syed Ahmad Khan as the Muhammadan Anglo-Oriental College in 1875. Muhammadan Anglo-Oriental College became Aligarh Muslim University in 1920, following the Aligarh Muslim University Act. It has three off-campus centres in AMU Malappuram Campus (Kerala), AMU Murshidabad centre (West Bengal), and Kishanganj Centre (Bihar). The university offers more than 300 courses in traditional and modern branches of education, and is an institute of national importance as declared under seventh schedule of the Constitution of India at its commencement.

The university has been ranked 801–1000 in the QS World University Rankings of 2021,[3] and 17 in India by the National Institutional Ranking Framework in 2020.[4] Various clubs and societies function under the aegis of the university and it has various notable academicians, literary figures, politicians, jurists, lawyers, sportspeople, among others as its alumni. 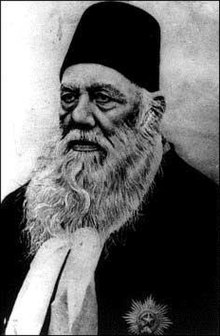 Bab-e-Syed, entrance to the university

The university was established as the Muhammadan Anglo-Oriental College in 1875 by Sir Syed Ahmad Khan,[5][6] starting functioning on 24 May 1875.[7] The movement associated with Syed Ahmad Khan and the college came to be known as the Aligarh Movement, which pushed to realise the need for establishing a modern education system for the Indian Muslim populace.[8] He considered competence in English and Western sciences necessary skills for maintaining Muslims' political influence.[citation needed] Khan's vision for the college was based on his visit to Oxford University and Cambridge University, and he wanted to establish an education system similar to the British model.[9]

A committee was formed by the name of foundation of Muslim College and asked people to fund generously. Then Viceroy and Governor General of India, Thomas Baring gave a donation of ₹10,000 while the Lt. Governor of the North Western Provinces contributed ₹1,000, and by March 1874 funds for the college stood at ₹1,53,920 and 8 anas[7] Maharao Raja Mahamdar Singh Mahamder Bahadur of Patiala contributed ₹58,000 while Raja Shambhu Narayan of Benaras donated ₹60,000.[10] Donations also came in from the Maharaja of Vizianagaram as well.[11] The college was initially affiliated to the University of Calcutta for the matriculate examination but became an affiliate of Allahabad University in 1885. [7] The 7th Nizam of Hyderabad, HEH Mir Osman Ali Khan made a remarkable donation of Rupees 5 Lakh to this institution in the year 1918. [12][13][14][15]

Masjid at the Aligarh Muslim University

Before 1939, faculty members and students supported an all-India nationalist movement but after 1939, political sentiment shifted towards support for a Muslim separatist movement. Students and faculty members supported Muhammad Ali Jinnah and the university came to be a center of the Pakistan Movement.[22][23]

Dr. Sheikh Abdullah ("Papa Mian") is the founder of the women's college of Aligarh Muslim University and had pressed for women's education, writing articles while also publishing a monthly women's magazine, Khatoon. To start the college for women, he had led a delegation to the Lt. Governor of the United Provinces while also writing a proposal to Sultan Jahan, Begum of Bhopal. Begum Jahan had allocated a grant of ₹ 100 per month for the education of women. On 19 October 1906, he successfully started a school for girls with five students and one teacher at a rented property in Aligarh.[24] The foundation stone for the girls' hostel was laid by him and his wife, Waheed Jahan Begum ("Ala Bi") after struggles on 7 November 1911.[24] Later, a high school was established in 1921, gaining the status of an intermediate college in 1922, finally becoming a constituent of the Aligarh Muslim University as an undergraduate college in 1937.[25] Later, Dr. Abdullah's daughters also served as principals of the women's college.[24] One of his daughters was Mumtaz Jahan Haider, during whose tenure as principal, Maulana Abdul Kalam Azad had visited the university and offered a grant of ₹9,00,000. She was involved in the establishment of the Women's College, organised various extracurricular events, and reasserted the importance of education for Muslim women.[26]

In 2014, then vice-chancellor Zameer Uddin Shah turned down a demand by female students to be allowed to use the Maulana Azad Library, which was males-only. Shah stated that the issue was not one of discipline, but of space as if girls were allowed in the library there would be "four times more boys", putting a strain on the library's capacity. [27][28][29] Although there was a separate library for the university's Women's College, it was not as well-stocked as the Maulana Azad Library[27] Union Minister of Human Resource Development, Smriti Irani decried Shah's defence as "an insult to daughters".[28] Responding to a petition filed by Human Rights Law Network, the Allahabad High Court ruled in November 2014 that the university's ban on female students from using the library was unconstitutional, and that accommodations must be made to facilitate student's use regardless of gender.[29][30] The Court gave the university time until 24 November 2014 to comply.[30]

Aligarh Muslim University is considered to be institution of national importance, under the seventh schedule of the Constitution of India.[31][32] In 1967, a constitution bench of the Supreme Court had held that the university is not a minority educational institution protected under the Indian constitution; the verdict had been given in case to which the university was not a party.[33] In 1981, an amendment was made to the Aligarh Muslim University Act, following which in 2006 the Allahabad High Court struck down the provision of the act which accorded the university minority educational institution status.[34] In April 2016, the Indian government stated that it would not appeal against the decision.[35][36] In February 2019, the issue was referred by the Supreme Court of India to a constitution bench of seven judges.[34][33] 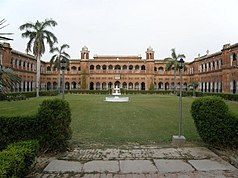 The campus of Aligarh Muslim University is spread over 467.6 hectares in the city of Aligarh, Uttar Pradesh. The nearest railways station is the Aligarh Junction. It is a residential university with most of the staff and students residing on the campus. There are 19 halls of residence for students (13 for boys and 6 for girls) with 80 hostels.[37] The Halls are administered by a Provost and a number of teacher wardens who look after different hostels. Each Hall maintains a Dining Hall, a Common Room with facilities for indoor games, a Reading Room, Library, Sports Clubs and a Literary.[38] The Halls are named after people associated with the Aligarh Movement and the university.

Sir Syed Hall is the oldest Hall of the University. It houses many heritage buildings such as Strachey Hall, Mushtaq Manzil, Asman Manzil, Nizam Museum and Lytton Library, Victoria Gate, and Jama Masjid.[39]

The main university gate is called Bab-e-Syed. In 2020 a new gate called Centenary Gate was built to celebrate the centenary year of the university.[44]

In 2018, Mufaddal Saifuddin was elected chancellor and Ibne Saeed Khan, the former Nawab of Chhatari was elected the pro-Chancellor. Syed Zillur Rahman was elected honorary treasurer.[46] On 17 May 2017, Tariq Mansoor assumed office as the 39th vice-chancellor of the university.[47]

In addition the University also maintains 15 Centres, 3 Institutes, 10 schools including Minto Circle and the Ahmadi School for the Visually Challenged[50] The university's Faculty of Theology has two departments, one for the Shi'a school of thought and another for the Sunni school of thought.[51]

Aligarh Muslim University has established three centres at Malappuram (Kerala; the AMU Malappuram Campus), Murshidabad (West Bengal) and Kishanganj (Bihar), while a site has been identified for Aurangabad, (Maharashtra) centre.[52][53]

Aligarh Musilim University offers over 300 degrees and is organised around 12 faculties offering courses in a range of technical and vocational subjects, as well as interdisciplinary subjects. In 2011, it opened two new centres in West Bengal and Kerala for the study of MBAs and Integrated Law. The university has around 28,000 students and a faculty of almost 1,500 teaching staff. Students are drawn from all states in India and several different countries, with most of its international students coming from Africa, West Asia and Southeast Asia. Admission into the University is entrance based.[54] 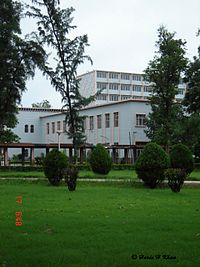 The Maulana Azad Library is the primary library of the university, consisting of a central library and over 100 departmental and college libraries. It houses royal decrees of Mughal emperors such as Babur, Akbar and Shah Jahan.[74] The foundation of the library was laid in 1877 at the time of establishment of the Mohammedan Anglo-Oriental College by Robert Bulwer-Lytton, 1st Earl of Lytton, then viceroy of India and it was named after him as Lytton Library. The present seven-storied building was inaugurated by Jawaharlal Nehru, the first prime Minister of independent India, in 1960 and the library was named after Abul Kalam Azad, popularly known as Maulana Azad, the first education minister of the independent India.[74][75]

The social science cyber library was inaugurated by Pranab Mukherjee, then President of India, on 27 December 2013.[76] In 2015, it was accredited with the International Organization for Standardization certification.[77]

The AMU Tarana or anthem was composed by poet and university student Majaz.[81] It is an abridged version of Majaz's 1933 poem Narz-e-Aligarh.[82] In 1955 Khan Ishtiaq Mohammad, a university student, composed the song and was adopted as the official anthem of the University. The song is played during every function at the university along with the National Anthem.[83]

Aligarh Muslim University Students` Union or AMUSU is the university-wide representative body for students at the university. It is an elected body.

The university has sports and cultural clubs functioning under its aegis. The Siddons Union Club is the debating club of the university.[84] It was established in the year 1884 and was named after Henry George Impey Siddons, the first principal of the MAO college.[85] It has hosted a politicians, writers, Nobel laureates, players, and journalists, including the Dalai Lama, Mahatma Gandhi, Abul Kalam Azad, Jawahar Lal Nehru.[86] Sporting clubs include the Cricket Club, Aligarh Muslim University[87] and the Muslim University Riding Club.[88]

The Raleigh Literary Society of the university hosts competitive events, plays, and performances,[89][90] including performances of Shakespeare's plays.[91] The society is named after Shakespeare critic, Sir Walter Raleigh who had served as the English professor at the Mohammedan Anglo-Oriental College from 1885 to 1887.[91]

The Law Society of the university was founded in 1894 as a non-profit student organization. The society publishes law reviews and organizes events, both academic and social, from annual fest to freshers social and farewell party for final year students.[92][93]

Every year the various clubs of the university organize their own cultural festivals. Two notable fests are the University Film Club's Filmsaaz and the Literary Club's AMU Literary Festival.

AMU Journal is an independent student run newspaper and online News/Media portal,[94] it was founded in the year 2016 by a group of AMU Students to raise campus issues and to provide News and information about Happening Events inside the University,[95][circular reference] AMU Journal has over 200k user online including website and social Media, it has 100k monthly Viewers, 2900 subscribers on YouTube channel, 64k followers on Facebook,[96] and 15k followers on Twitter.

Old boys association is the alumni network of the university. It was established in the year 1898 and has been statutory recognition under AMU, Act 1920.[97]

Following is a list of alumni from the university.[98]