On 9 December 2019, the World Anti-Doping Agency initially handed Russia a four-year ban from all major sporting events, after RUSADA was found non-compliant for handing over manipulated lab data to investigators.[3] However, the Russia national team could still enter qualification, as the ban only applies to the final tournament to decide the world champions. The WADA ruling allowed athletes who were not involved in doping or the coverup to compete, but prohibited the use of the Russian flag and anthem at major international sporting events.[4] An appeal to the Court of Arbitration for Sport was filed,[5] but WADA's decision was upheld though reduced to a two-year ban.[6] The CAS ruling also allowed the name "Russia" to be displayed on uniforms if the words "Neutral Athlete" or "Neutral Team" have equal prominence.[7] If Russia qualifies for the tournament, its players will not be able to use their country's name alone, flag or anthem at the World Cup, as a result of the nation's two-year ban from world championships and Olympic Games in all sports.[7]

The qualification format was confirmed by the UEFA Executive Committee during their meeting in Nyon, Switzerland, on 4 December 2019.[8][9] The qualification will depend, in part, on results from the 2020–21 UEFA Nations League, although to a lesser degree than the 2018–19 UNL had on qualification for UEFA Euro 2020. The structure will maintain UEFA's usual 'group stage/playoff stage' structure, with only the specific format of the play-offs amended.[10][11][12]

On 4 December 2019, the UEFA Executive Committee initially approved the use of the video assistant referee system for the qualifiers.[10] However, VAR was not implemented at the start of qualification due to the impact of the COVID-19 pandemic on operational and logistical capabilities.[13] On 5 August 2021, UEFA announced that the VAR system would be used for the remainder of qualification, starting from September 2021.[14]

Below is the schedule of the European qualifiers for the 2022 FIFA World Cup.[9]

In March 2020, UEFA announced that the two matchdays planned to take place in June 2021 would be moved following the rescheduling of UEFA Euro 2020 to June and July 2021 due to the COVID-19 pandemic.[15] To allow for the completion of the qualifying group stage in November 2021 as scheduled, UEFA announced on 24 September 2020 that the March and September 2021 windows in the FIFA International Match Calendar were expanded from two to three matchdays.[16][17] The changes to the International Match Calendar for March and September 2021, which extended each window by one day, were approved by the FIFA Council on 4 December 2020.[18]

The original schedule of the qualifying group stage, as planned before the pandemic, was as follows.[9]

The draw for the first round (group stage) was held in Zürich, Switzerland, on 7 December 2020, 18:00 CET (UTC+1).[19][20][21][22][23][24] However, due to the COVID-19 pandemic, the draw was held as a virtual event without any representatives of member associations present. It was originally planned to be held on 29 November 2020.[25] On 18 June 2020, the UEFA Executive Committee approved the draw regulations for the qualifying group stage.[26] The draw was presented by Spanish journalist Cristina Gullón and conducted by FIFA's acting director of competitions, Jaime Yarza.[27] He was assisted by former footballers Daniele De Rossi and Rafael van der Vaart, who drew the balls from the pots.[28]

The 55 teams were seeded into six pots based on the FIFA World Rankings of November 2020, after the conclusion of the league phase of the 2020–21 UEFA Nations League. Pots 1 to 5 contained ten teams, while Pot 6 contained five teams. The teams were drawn into ten groups: five groups of five teams (Groups A–E) and five groups of six teams (Groups F–J). The draw started with Pot 1 and completed with Pot 6, from where a team was drawn and assigned to the first available group in alphabetical order. Therefore, each six-team group contains one team from each of the six pots, while each five-team group contains one team from each of the first five pots.[29]

The following restrictions were applied with computer assistance:[17][30][31]

The fixture list was confirmed by UEFA on 8 December 2020, the day following the draw.[34][35][36] Qatar were partnered with the five-team Group A, which enabled the 2022 FIFA World Cup hosts to play centralised friendlies against these countries on their "spare" match dates. However, these friendlies did not count in the qualifying group standings.[37][38]

The second round (play-offs) will be contested by the ten group runners-up and the best two Nations League group winners, based on the Nations League overall ranking,[39] who finished outside the top two of their qualifying group. They will be separated into three play-off paths, with each path featuring two single-leg semi-finals and one single-leg final. The semi-finals will be hosted by the six best-ranked runners-up of the qualifying group stage, while the host of the final will be determined by a draw.[40] The semi-finals will be played on 24 March, and the finals on 29 March 2022. The winners of each path will qualify for the World Cup.

The ten runners-up from the first round advanced to the play-offs. Based on the results from the qualifying group stage, the six best-ranked teams were seeded, while the bottom four were unseeded in the semi-final draw.

The best two Nations League group winners that finished outside the top two of their qualifying group advanced to the play-offs and were unseeded in the semi-final draw.

Following the completion of the UEFA First Round, the twelve teams that advanced to the play-offs were drawn into three paths of four teams on 26 November 2021, 17:00 CET, in Zürich, Switzerland.[41][42][43][44] The following procedure was applied in the draw:[40]

For political reasons, matches between Russia and Ukraine were considered prohibited clashes, unable to be drawn into the same play-off path.[45]

The six runners-up with the best group stage performance were seeded in the semi-final draw, while the remaining four runners-up and two teams advancing via the Nations League were unseeded. The seedings were as follows: 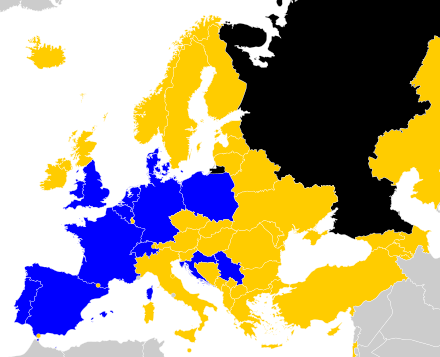 Status of UEFA countries with respect to the 2022 FIFA World Cup:
Team has qualified for World Cup
Team can qualify
Team eliminated
Country not a UEFA member

The following teams from UEFA have qualified for the final tournament. In all, 13 UEFA members will qualify.

1 Bold indicates champions for that year. Italic indicates hosts for that year.
2 Competed as West Germany. A separate team for East Germany also participated in qualifications during this time, having only qualified in 1974.
3 From 1930 to 1998, Serbia competed as Yugoslavia, while in 2006 as Serbia and Montenegro.

There have been 763 goals scored in 250 matches, for an average of 3.05 goals per match (as of 16 November 2021). Players highlighted in bold are still active in the competition.

Below are full goalscorer lists for all groups and the play-off rounds: