In the previous elections in 2016, the All India Trinamool Congress (AITC or TMC) retained its majority in the Legislative Assembly with 211 seats. The Indian National Congress won 44 seats and the Left Front won 33 seats fighting within an alliance. While the Bharatiya Janata Party and the Gorkha Janmukti Morcha managed to win only 3 seats each of the total 294 seats.[6]

In the 2019 general elections AITC won 22 and the BJP won 18 of the 42 Lok Sabha seats in West Bengal.[7] Bagging 40 percent of the vote share, an increase from the previous time and in by-elections from 2016 to 2021, BJP had also increased their seats in the legislative assembly by 31 as of 2021 through defections from TMC, Congress and Left leaders.[8] According to various political analysts, the shifting of left and other opposition voters towards the BJP caused the meteoric rise in BJP's vote share.[9][10][11]

The COVID-19 pandemic became an election issue.[12][13] The Government of West Bengal was accused of "fudging" the count of positive cases and deaths in the regions.[14] The AITC-led state government and BJP-led union government blamed each other for the surge in COVID-19 infections over the course of the campaign.[15]

The BJP accused Chief Minister Mamata Banerjee of not having attended COVID-19 emergency management meetings held during the months of election campaigning, despite the advent of the second wave of infections.[16] 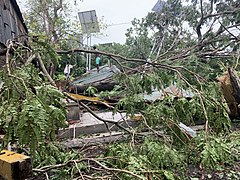 In May 2020, Cyclone Amphan hit the state a year before elections.[17][12] After the passing away of the cyclone, widespread allegations of mismanagement[18] and relief scam were seen.[19][20] Protest broke out in various district of the state over these allegations.[21][22] The opposition made it an election issue ahead of the Assembly polls.[23][24]

In 2019, the Bharatiya Janata Party-led Union Government passed the Citizenship (Amendment) Act, 2019 (CAA) in the Indian Parliament, promising citizenship to immigrants and refugees belonging from the religious minorities in Bangladesh and hoping to provide them with rehabilitation.[8][25] The BJP's Bengali booklet released in January 2020 claimed that the National Register of Citizens will be implemented to identify allegedly undocumented illegal Muslim immigrants, but religiously persecuted Hindu, Sikh, Buddhist, Christian, Jain, Parsi and other religious minorities will be "shielded" by the Citizenship Amendment Act.[26][27]

Polarisation amongst various religious, linguistic and caste communities are also likely to play a role in this election.[28] Both TMC and BJP have promised schemes for various communities.[29][30] Although previously mobilized by Left governments against elites under the 'class' narrative, the Dalits of West Bengal have started asserting their identity politically.[31][32][33] Religious polarization is particularly intense in districts bordering Bangladesh such as North 24 Parganas. Arguments regarding who are native to the state and constituencies are also likely to impact the elections.[34][35][36] Rebellion and dissatisfaction of many Trinamool leaders are also likely to impact the elections.[37] 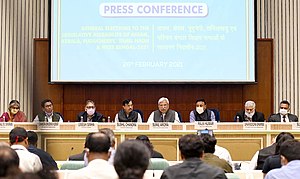 The Chief Election Commissioner, Sunil Arora holding a press conference to announce the schedule for Legislative Assembly election of West Bengal along with Assam, Kerala, Tamil Nadu, and Puducherry, in New Delhi on February 26, 2021. The Election Commissioners, Sushil Chandra and Rajiv Kumar and the senior officials of ECI are also seen.

Election schedule were announced on 26 February 2021 and the election was held in 8 phases from 27 March 2021 to 29 April 2021 and votes will be counted on 2 May 2021.[38][39] Due to polling abnormalities, re-polling for the booth number 88 of Jangipara was held in the fourth phase.[40] The elections in Jangipur and Samserganj were adjourned due to the death of the Congress candidate in Samserganj and RSP candidate in Jangipur.[41] A new schedule for the election in these two seats were announced and the polling will be held on 13 May 2021.[42] However, due to the day being Eid, the voting day was again rescheduled for 16 May.[43] 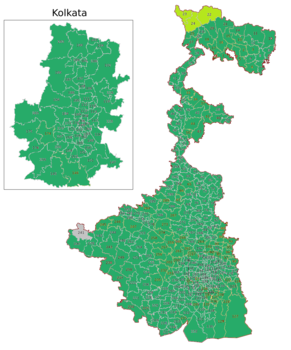 Map of the seat sharing arrangements of the All India Trinamool Congress for the 2021 West Bengal Legislative Assembly election.

Left Front chairman Biman Bose announced candidates for first and second-phase elections on 5 March alongside Congress and ISF leaders leaving seats for them in the list.[57] Indian National Congress revealed its first list of 13 candidates for the first two phases on 6 March.[58] Left Front Announced its second list of candidates on 10 March comprising of several new and young faces from AISF, AIYF, SFI and DYFI along with some well-known veteran faces including ex ministers of Left Front govt and ex-MPs.[59] That day Biman Bose declared DYFI West Bengal state president Minakshi Mukherjee as the CPI(M) candidate for 'High-Profile' Nandigram (Vidhan Sabha constituency) seat which was kept vacant in the first list published on 5 March.[60] Congress revealed its second list of 34 candidates on 14 March.[61] ISF released list of their first set of 20 candidates on the same day.[62] Sanyukta Morcha announced 15 more candidates on 17 March consisting of 9 from the Left, 2 from Congress and 4 from ISF camp.[63] Congress revealed its third list of 39 candidates on 20 March,[64] and two more on 22 March. 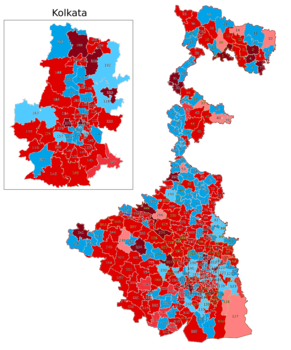 Map of the seat sharing arrangement between the parties of the Sanjukta Morcha for the 2021 West Bengal Legislative Assembly election.

Five hill-based parties pledged support to BJP ahead of the assembly election (Gorkha National Liberation Front (GNLF), Communist Party of Revolutionary Marxists, Akhil Bharatiya Gorkha League (ABGL), Gorkhaland Rajya Nirman Morcha and SUMETI Mukti Morcha.[46] Hindu Samhati, a right wing organisation in West Bengal, withdrew their support from the BJP initially[69] and later declared to contest elections on its own,[70] however in the end they supported the BJP.[71] BJP alloted a seat of Amta constituency to the president of Hindu Samhati to contest on BJP's symbol.[72]

Map of the seat sharing arrangements of the Bharatiya Janata Party for the 2021 West Bengal Legislative Assembly election.

Shiv Sena initially said that they would contest in around 100 seats,[75] but later on 4 March 2021 announced that they would not contest and will instead support Mamata Banerjee and TMC from outside.[76]

In 292 seats, a total of 2,132 candidates were in the fray. The voting in 2 constituencies had to be postponed to 16 May, after the death of 1 candidate each.

List of the candidates constituency wise of the four main parties/alliance:

The Election Commission on 27 March, banned publication of any surveys and exit polls till 7:30 PM of 29 April to prevent any influence on voters.[97][98] However, in another notification, the time was brought forward to 7:00PM of the same day.[99]

A number of Pre-poll surveys for the elections were published by different agencies and groups in the span of one year until 27 March. However most polls contradicted each other regarding the possible outcome.[112]

These elections is being conducted amidst the COVID-19 pandemic, necessary guidelines are being issued by the Election Commission of India.[124]

Amidst the COVID-19 pandemic worldwide, the Election Commission of India issued various health guidelines for conducting the elections. The guidelines include use of masks, sanitisation of the polling booths, use of thermal scanners before entering the polling booths, maintaining social distancing, and so forth.[125] The number of maximum voters for each polling station has also been brought down to 1000 from 1500.[126]

A volunteer conducting thermal screening of the voters, at a polling booth, during the third phase of the West Bengal Assembly Election, in Uluberia, West Bengal on April 06, 2021.

After hikes in COVID-19 cases in the state,[127] the Election Commission issued warning against all recognised state and national political parties for following the COVID-19 guidelines strictly.[128] The Election Commission banned all political rallies, public meetings, street plays and nukkad sabhas during 7 PM to 10 AM starting from 16 April.[129] On 22 April 2021, owing to the second wave of the Covid-19 pandemic in India, ahead of the 7th & 8th phase of voting the Election Commission of India withdrew permission for any kind of roadshows including cycle, bike, vehicle rallies and added that not more than 500 people would be allowed in public meetings.[130] ECI on 27 April issued a notification banning all kinds of victory processions on and after the day of counting of votes.[131]

An elderly elector cast her vote with assistance of CAPF Jawans at 260 Bardhaman Dakshin Assembly Constituency of Purba Bardhaman District.

Polling officials collecting the Electronic Voting Machine (EVMs) and other necessary inputs required for the West Bengal Assembly Election, at a distribution centre, in Uluberia, West Bengal on 5 April 2021.

After several instances of violence, threats and murders even before the polls were announced, the Election Commission of India and Home Ministry ordered twelve companies of central forces were be deployed in West Bengal from 20 February. At least 125 more central troops were ordered to reach West Bengal on 25 February to ensure law and order in the poll-bound state. The Election commission said that forces will lay stress on area domination, especially in sensitive zones.[132] 60 companies of the Central Reserve Police Force (CRPF), 30 companies of the Sashastra Seema Bal (SSB), 25 companies of the Border Security Force (BSF) and five companies each of the Central Industrial Security Force (CISF) and the Indo-Tibetan Border Police (ITBP).[133] The total number of central forces deployed increased progressively to 725 companies.[134][135] The number of total deployment of central security forces increased to 1000 companies following deployment of additional 200 CAPF companies after the third phase of polling.[136] 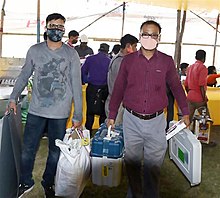 Polling officials carrying the Electronic Voting Machine (EVMs) and other necessary inputs required for the West Bengal Assembly Election, at a distribution centre, in Uluberia, West Bengal on April 05, 2021. 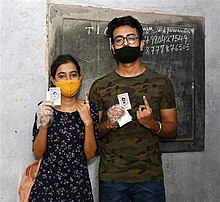 First time voters showing mark of indelible ink after casting their vote, at a polling booth, during the fourth phase of the West Bengal Assembly Election, at Nehru Colony Primary School, Regent Park, in Kolkata, West Bengal on April 10, 2021.

Voters standing in the queue to cast their votes, at a polling booth, during the third phase of the West Bengal Assembly Election, in Uluberia, West Bengal on April 06, 2021.

Nearly 74 lakh electorates across 10,288 polling stations of West Bengal were registered to in this phase of election. Webcasting were arranged for 5392 polling stations. During this phase, a total of 10288 Ballot Units (BUs), 10288 Control Units (CUs) and 10288 VVPATs were used in West Bengal.[139]

Nearly 73 lakh electorates across 10,592 polling stations of West Bengal were registered to in this phase of election. Webcasting were arranged for 5,535 polling stations. During this phase, a total of 10,620 Ballot Units (BUs), 10,620 Control Units(CUs) and 10,620 VVPATs were used. 1,137 Flying Squads (FS) and 1012 Static Surveillance Teams (SST) were operational to check movement of cash, liquor, drugs & freebies. 3 Air Intelligence Units (AIU) of IT Department were also set up at Kolkata, Andal in Durgapur and Bagdogra. 14,499 cases of Model Code of Conduct violations were reported from West Bengal with 11,630 disposed till 4.30 pm of voting day.[140]

After the announcement of results, post-poll violence broke out in the state. The BJP claimed at least six of its' workers were killed during attacks by workers of the ruling Trinamool Congress.[166] The governor summoned the Director of General Police and Kolkata Police Commissioner to discuss the situation.[167] By 4 May allegedly around 11 opposition party workers were killed.[168] The CPI (M) and Congress alleged their workers had also been attacked by the TMC.[169][170]

Union Ministry of Home Affairs sought a report from the Government of West Bengal over incidents of post-election brutality against opposition political workers in the state.[171]

It was for the first time in history that the Left Front and Indian National Congress won zero seats in the West Bengal Legislative Assembly. West Bengal was once a strong hold of the leftist parties.[172]