The election campaign started on 25 March 2021 during the COVID-19 pandemic in Scotland, although Parliament would not be officially dissolved until 5 May, the day before the election.[4] The main parties that ran for election are the Scottish National Party (SNP), led by First Minister Nicola Sturgeon, the Scottish Conservatives led by Douglas Ross, Scottish Labour led by Anas Sarwar, the Scottish Liberal Democrats led by Willie Rennie, and the Scottish Greens, led by their co-leaders Patrick Harvie and Lorna Slater. Of those five parties, two changed their leader since the 2016 election.

Newer parties set up since the last election included Reform UK Scotland, led by Michelle Ballantyne; the Alba Party, led by former First Minister and SNP leader Alex Salmond; and All for Unity, led by George Galloway. These parties only competed for seats on the regional lists and all failed to win any seats.

The election concluded with the SNP winning a fourth consecutive term in government, winning 64 seats. This was an increase of one, but fell one seat short of an overall majority. The SNP gained Edinburgh Central, Ayr, and East Lothian as well as winning the largest share of the popular vote and the largest number of constituency seats in any Scottish Parliament election (62).[5] The Greens won 8 seats, their best result to date at a Scottish Parliament election, while the Conservatives retained second place with 31 seats. Labour had its worst-ever result with 22 seats, and the lowest share of the vote in both Constituency & List votes for either Westminster or Holyrood since 1910. The Lib Dems won 4 seats, their worst showing at a Holyrood election to date.[6]

The SNP and the Greens, both of which support Scottish independence, won 72 of the 129 seats in the parliament. Unionist parties achieved a slight majority of votes in constituency contests, whilst pro-independence parties did the same in the regional list votes.[7] Voter turnout in the election reached 63.5%, the highest-ever at a Scottish Parliament election.

At the 2016 election, the ruling Scottish National Party (SNP) lost its parliamentary majority but was able to continue governing under Nicola Sturgeon as a minority administration.[8] At the same election, the Conservatives overtook Labour into second place, whilst the Greens overtook the Liberal Democrats into fourth place.[8] No representatives of minor parties were elected to the Parliament.[8]

The 2017 local elections saw the SNP hold its first-preference vote share compared to 2012 at 32%, finishing as the largest party in half of councils (sixteen).[9]

Independent candidates won 10% of the vote, down 1%, as the Lib Dems were marginally up, winning 7% of votes. The Greens increased their share by 2%, to earn 4% of votes.[9] For the first time since the electoral system was changed to the single transferable vote in 2007, no mainland council had a majority government.[9]

A month later, at the 2017 UK general election, the SNP lost twenty-one of its MPs, winning thirty-five seats on 37% of the vote (down thirteen percentage points). Most notably, former First Minister Alex Salmond and Angus Robertson, the party's Westminster leader, lost their seats.[10]

The Conservatives won their highest vote share in any election in Scotland since 1979, at 29%, and their highest number of MPs since 1983, winning thirteen.[10] They surpassed Labour on both counts, Labour earning 28% and seven seats – both an improvement over its 2015 showing. The Lib Dems won four seats, up three, but lost nearly 1% of their national vote share. None of the smaller parties managed more than 0.2% of the vote. UKIP and the Greens heavily reduced the number of candidates compared to 2015, with UKIP down from forty-one to ten and the Greens from thirty-one to three.[10]

The 2019 European election was dominated by the impending Brexit-deadline and was won in Scotland by the SNP. The party won three of the six seats, up one from 2014, in the European Parliament and increased its vote share from 29% to 38%; they were the largest party in all local authority areas, with the exception of Orkney and Shetland.[11]

The Brexit Party, led by former-UKIP leader Nigel Farage, finished second on 15% – 4% higher than UKIP achieved in 2014. The pro-remain Liberal Democrats won 14% of the vote and were the largest party in the two Northern Isle councils.[11]

Both the Conservatives and Labour performed badly across Britain, and finished fourth and fifth in Scotland respectively. The Tories fared relatively better in Scotland than elsewhere in the UK, achieving 12% (down 6% on 2014) in Scotland compared to 9% elsewhere. Labour lost 17% of the vote, finishing on 9%, and had its worst showing in Scotland since 1910; the Greens held level at 8%.[11]

The Brexit Party, Lib Dems and Conservatives each won a single seat, in addition to the SNP's three. Labour (two) and UKIP (one) lost the seats they won in 2014.[11]

The SNP increased its vote share to 45% at the 2019 general election, only 5% behind its 2015 performance, reclaiming thirteen of the seats they lost in 2017, constituting in a landslide victory.[12]

The Conservatives lost half the seats they gained in 2017, but retained a quarter of the vote – down 4%. The party won a majority of seats in the House of Commons across the UK, its biggest majority since 1987. Labour recorded its worst general election result in Scotland since 1910, being again reduced to a single Scottish seat, and achieved a 19% share of the vote. Across Britain, the party suffered its worst result since 1935, with many former safe Labour seats being gained by the Conservatives.[12][13]

The Liberal Democrats made no net losses, but Jo Swinson, the party's UK leader, lost her seat to the SNP. The party increased its share by 3%, to record just under one in ten votes.[14] The Greens managed 1% of the vote, as they stood in twenty-two seats.[12]

Three parties underwent leadership changes during the parliamentary term. In 2017, Kezia Dugdale resigned as Leader of Scottish Labour and was replaced by Richard Leonard.[15] On 14 January 2021, less than four months before the election was held, Leonard resigned.[16] The 2021 Scottish Labour leadership election was held in February 2021, and was won by Anas Sarwar.[17]

On 1 August 2019, Lorna Slater became co-leader of the Scottish Greens alongside Patrick Harvie.[18]

Later in August 2019, Ruth Davidson resigned as leader of the Scottish Conservatives and was succeeded by Jackson Carlaw.[19] Carlaw, however, himself resigned from the leadership in July 2020,[20] and Douglas Ross won the subsequent leadership election without opposition.[21]

Expansion of the electorate

This is the first election after the passage of the Scottish Elections (Franchise and Representation) Act, which extended the franchise to those serving prison sentences of 12 months or less.[22][23] In 2005, the United Kingdom was found in breach of Protocol 1, Article 3 of the European Convention on Human Rights in regards of prisoner voting rights in the European Court of Human Rights as a result of Hirst v United Kingdom (No 2); the Act brings Scotland in line with the court ruling.[24]

This act also allows all foreign nationals resident in Scotland to vote and all those with indefinite leave to remain or equivalent status, including pre–settled status in the United Kingdom, to stand as candidates.[25][22][26] A BBC News report in April 2021 said that there were around 55,000 foreign nationals who had been given the right to vote as a result of these changes, including 20,000 refugees.[26]

The Scottish Elections (Dates) Act did not affect the legal possibilities for the Parliament to be dissolved earlier, those being;

On 16 November 2020, the Scottish General Election (Coronavirus) Bill was introduced.[32] This draft legislation stated that while the next election was intended to be held on 6 May 2021, the Presiding Officer would gain the power to postpone the election by up to six months if the spread of COVID-19 made that date impractical.[32] The bill also proposed to change the date of dissolution to the day before the election, meaning that the Parliament could be recalled during the election period.[32] The bill was enacted and received Royal Assent on 29 January 2021.[33] Parliament was in fact recalled on 12 April, to allow MSPs to mark the death of Prince Philip, Duke of Edinburgh.[34]

James Dornan announced in February 2020 his intention to retire at the next Holyrood election,[67] but reversed this decision some months later.[68]

The SNP, Conservatives, Labour and Liberal Democrats fielded candidates in all 73 constituencies and all eight of the regional ballots.[69] Five other parties contested both all eight regions and at least one constituency: the Scottish Greens (12 constituencies) the Scottish Libertarian Party (9), the Scottish Family Party (7), UKIP (5) and the Freedom Alliance (4). Four parties – Abolish the Scottish Parliament Party, Alba Party, All for Unity, and Reform UK – stood in all eight electoral regions, but did not contest any constituencies.

The Scottish Socialist Party, which participated in the last election as part of the electoral alliance RISE – Scotland's Left Alliance, opted not to participate in this election, for the first time since its inception.

This list is incomplete; you can help by adding missing items with reliable sources. 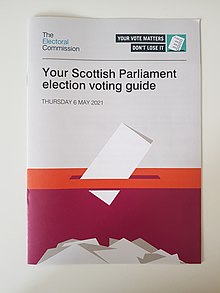 An Electoral Commission voter guide booklet sent to Scottish households ahead of the election.

The total number of Members of the Scottish Parliament (MSPs) elected to the Parliament is 129.

The election campaign started on 25 March 2021.[4] The Scottish Conservatives launched their campaign the same day, with a focus on promoting Scotland's recovery from the COVID-19 pandemic.[74]

On 26 March 2021, the Alba Party was publicly launched by former First Minister of Scotland and SNP leader, Alex Salmond.[75][76][77][78] The party announced plans to stand list-only candidates. The party later gained two sitting MPs who defected from the SNP.[79] The Action for Independence party, which had intended to pursue a similar list-only strategy, announced they would stand down their candidates in favour of Alba.[80] Sturgeon said she would refuse to have any dealings with Salmond unless he apologises to the women who had accused him of harassment.[81]

BBC Scotland announced that it would broadcast two debates between the main parties' leaders; the first was aired on 30 March 2021 and was moderated by the corporation's Scotland editor Sarah Smith.[82] The debate included key questions from the audience on the COVID-19 recovery, climate change, and a second referendum on Scottish independence. The second BBC debate was held on 4 May 2021 and was moderated by BBC Scotland's political editor Glenn Campbell.[83]

On 1 April, Planet Radio announced their Clyde 2 station would be hosting a Leaders Phone-In with the main parties' leaders every Sunday before the election. Douglas Ross was the first to be interviewed on 4 April,[88] with Willie Rennie following on 18 April. Whilst Nicola Sturgeon was set to be interviewed on 11 April, campaigning was delayed following the death of Prince Philip and her phone-in was instead held on 22 April. Patrick Harvie followed on 25 April; and Anas Sarwar had the final phone-in on 2 May.[89]

Following Prince Philip's death on 9 April, the SNP, Conservatives, Labour, Greens and Liberal Democrats said they would suspend election campaigning until further notice.[90][91][92] After discussion between the parties, they agreed to resume campaigning after a special parliamentary session on 12 April to make tributes and to pause activities again on the day of the funeral (17 April).[34][93]

Graph of opinion poll results prior to the 2021 Scottish Parliament election. Trendlines are 30-day moving averages. 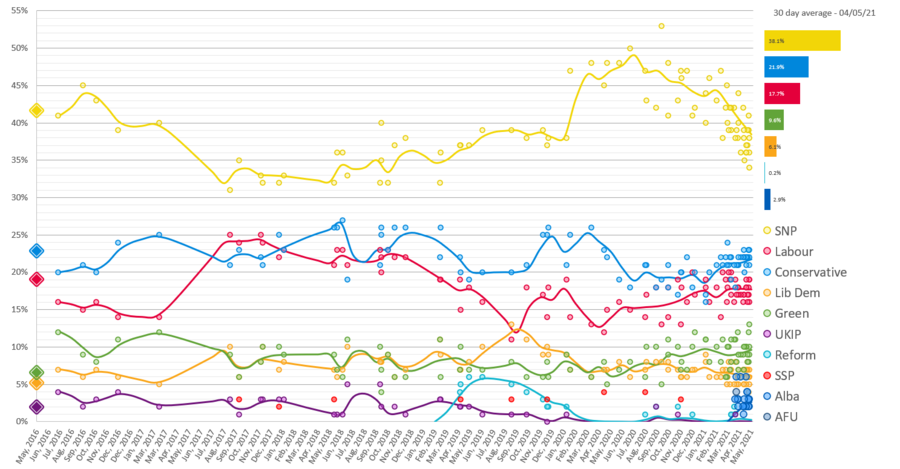 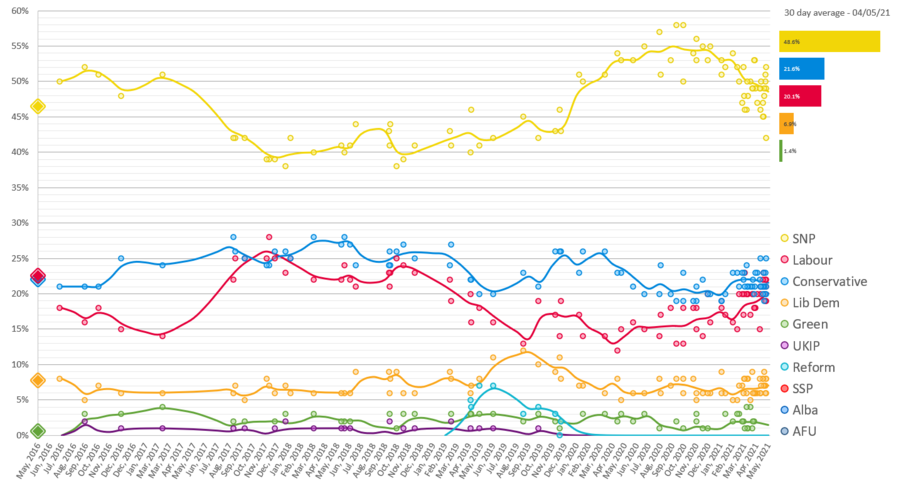 Below are listed all the constituencies which required a swing of less than 5% from the 2016 result to change hands. The most marginal opportunity for the Greens was in Glasgow Kelvin, which they needed a 7.1% swing to gain. The Liberal Democrats' best bet was Caithness, Sutherland and Ross, which required a 6.1% swing. The SNP ended up holding both of these constituencies. 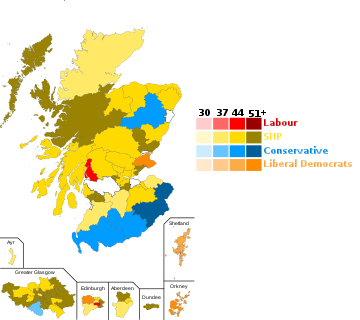 MSPs that lost their seats

Other elections in the UK which were held on the same day: