The number of the total medals of each team during the 2020 Summer Olympics.

The following medal table is a list of 92 National Olympic Committees (NOCs) and one non-NOC team ranked by the number of gold medals won by their athletes during the 2020 Summer Olympics in Tokyo, from 23 July to 8 August 2021.

A total of 93 nation teams won medals, breaking the previous record of 87 from the 2008 Beijing Olympics and the 2016 Rio Olympics. Furthermore, 65 nations won at least one gold medal, also breaking the record established at the Rio games. The United States won the most gold medals, as well as the most overall medals. Host Japan finished 3rd with 27 gold medals.

The design for the Olympic medals for the 2020 Summer Olympics was created by Junichi Kawanishi. The medals were manufactured using metal extracted from recycled small electronic devices donated by the public. The ribbon uses the traditional Japanese design motifs found in ichimatsu moyo, a harmonised chequered pattern, and kasane no irome, a traditional kimono layering technique, in a modern presentation. The case is manufactured from Japanese ash wood dyed with the same colour as the Olympic emblem. The circular lid and the body of the case can be opened like a ring connected by a magnet.[8] The obverse of the medals features Nike, the Greek goddess of victory, in front of Panathenaic Stadium and the Olympic rings.[9]

Due to the COVID-19 pandemic, athletes were presented with their medals on trays, and were asked to put them on themselves (or each other, in case of team winners), rather than having them placed around their necks by a dignitary.[10]

This is the table of the medal count of the 2020 Summer Olympics, based on the medal count of the International Olympic Committee (IOC). These rankings sort by the number of gold medals earned by a National Olympic Committee (NOC). The number of silver medals is taken into consideration next and then the number of bronze medals. If, after the above, countries are still tied, equal ranking is given and they are listed alphabetically by IOC Country Code. Although this information is provided by the IOC, the IOC itself does not recognize or endorse any ranking system.[11]

The 2020 Summer Olympic program featured 33 sports with 50 disciplines, and a total of 339 events, resulting in 339 sets of medals being distributed.

Two gold medals were awarded for a first-place tie in the men's high jump athletics event. No silver medal was awarded as a result.[12] 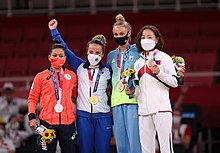 The medalists of the Women's 48 kg judo event

The medalists of the Women's 10 metre air pistol shooting event