The 2020 NBA draft was held on November 18, 2020. The draft was originally scheduled to be held at Barclays Center in Brooklyn on June 25, but was instead conducted at ESPN's facilities in Bristol, Connecticut, with the event held via videoconferencing. National Basketball Association (NBA) teams took turns selecting amateur United States college basketball players and other eligible players, including international players. It was televised nationally on ESPN. The draft lottery was originally scheduled to take place on May 19, 2020, but due to the ongoing COVID-19 pandemic, it was instead held on August 20, 2020.[1] This was the first draft since 1975 to not be held in June and was also the second to be done later than that month after the inaugural 1947 draft, which was conducted in July by the NBA's predecessor, the Basketball Association of America (BAA). The first pick was made by the Minnesota Timberwolves, who selected Anthony Edwards out of Georgia.

Anthony Edwards was selected 1st overall by the Minnesota Timberwolves. 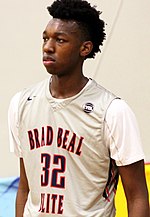 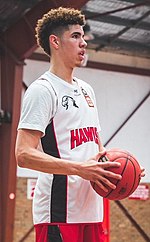 LaMelo Ball was selected 3rd overall by the Charlotte Hornets. 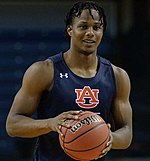 Isaac Okoro was selected 5th overall by the Cleveland Cavaliers.

2020 College Player of the Year Obi Toppin was selected 8th overall by the New York Knicks. 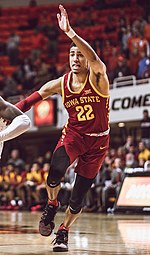 Tyrese Haliburton was selected 12th overall by the Sacramento Kings.

Cole Anthony was selected 15th overall by the Orlando Magic. 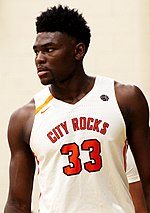 Isaiah Stewart was selected 16th overall by the Portland Trail Blazers (traded to the Detroit Pistons via the Houston Rockets). 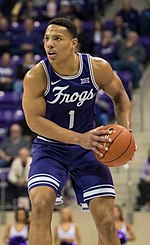 Desmond Bane was selected 30th overall by the Boston Celtics (traded to the Memphis Grizzlies).

These players were not selected in the 2020 NBA draft, but have played at least one game in the NBA.

Prior to the day of the draft, the following trades were made and resulted in exchanges of draft picks between the teams. Trade details to follow.

Draft-day trades will be made on the day of the draft.

Due to the ongoing COVID-19 pandemic that started earlier in the year, the invitation-only NBA Draft Combine and the event's on-court elements was held in multiple phases, lasting from September 28 until November 16, two days before the draft began.[68] For the first part, players began their league and team interviews via videoconference feeds, similar to this year's draft lottery. This segment lasted from September 28 until October 16. Then, in the second part, players began their individual, on-court programs at the NBA team facility nearest the player's home or interim residence instead of at one standardized area. While players were allowed to continue working out on their own even back in September 2020, this section lasted from October 16 until November 16. This program included strength and agility tests, anthropometric measurements, shooting drills, medical testing and examinations, and a "Pro Day" video filmed via HomeCourt, a mobile basketball training application. The NBA also expanded their Combine HQ tool for this period. While the NBA disallowed their own staff members to be involved with these workouts in person (either in the team's own practice facilities or nearby the player himself) at first, they eventually relaxed some of these restrictions to include up to three team executives meeting with a player they're interested in personally, as well as allowed a player to workout with multiple teams at the same time in their own towns. The NBA also gave a limit of 10 meetings total with the candidates there, with any extra meetings with someone cutting into their amount allowed for this year.

At the start of this year's draft combine, only 60 prospects were confirmed to participate in this event.[69] The top, headlining prospect involved with this combine is LaMelo Ball, an automatically eligible draft prospect that gained fame as a professional player both nationally and overseas years earlier after skipping his junior year of high school and was a top-3 selection for the draft.[70] In addition to him, R. J. Hampton was also invited as an automatically eligible draft prospect for this year, both representing Australia's NBL as outsider Rising Stars for different teams. Other notable invites include five fully international prospects (Deni Avdija, Killian Hayes, Théo Maledon, Paul Eboua, and Karim Mané, the last of whom played in a Canadian CEGEP), two high school postgraduates (Kenyon Martin Jr. and Josh Hall), and Jay Scrubb, a junior college prospect. Like with prior years, players still held the option to either sit out the combine or have only limited participation there, such as with LaMelo Ball doing interviews with teams only. For the first half of the combine, each participant was given a standard set of 10 questions to answer in front of each team asking them, as well as league officials under a half-hour setting, with players being allowed to interview as many teams as possible. In the second half of the combine, teams were allowed to meet with any candidate that had mutual interest in them back, though each team had a set limit of meetings with players in mind before the draft began. These meetings with players allowed teams to properly gauge each player to the best of their abilities during this time.

The NBA draft lottery is held annually to determine the draft order for the teams that did not make the playoffs in the preceding season. Every NBA team that missed the NBA playoffs holds a chance at winning a top-four pick, but teams with worse records have a better chance at winning a top-four pick, effective as of the 2019 draft.[71] After the lottery selects the teams that receive a top-four pick, the other teams receive an NBA draft pick based on their winning percentage from the prior season. As it is commonplace in the event of identical win-loss records, the NBA performs a random drawing to break ties for not just lottery teams, but also for playoff teams with equal records. This year, the Sacramento Kings won a tiebreaker for the draft lottery over the New Orleans Pelicans despite having a better overall record to conclude the regular season, bubble games included.

The lottery was originally scheduled to take place on May 19 at the United Center in Chicago, Illinois, but was postponed due to the COVID-19 pandemic and the length of the 2019–20 season's suspension. On July 21, 2020, the lottery was rescheduled for August 20.[72] The lottery teams included the eight teams that did not play in the resumed 2019–20 NBA season in July and August: the Golden State Warriors, Cleveland Cavaliers, Minnesota Timberwolves, Atlanta Hawks, Detroit Pistons, New York Knicks, Chicago Bulls, and Charlotte Hornets. They also included the other six teams that missed the playoffs in the resumed season: the Washington Wizards, Phoenix Suns, San Antonio Spurs, Sacramento Kings, New Orleans Pelicans, and Memphis Grizzlies, with seeding completely based on the teams' records from March 12, 2020.[73] The new lottery still took place in the United Center, but all guests representing the teams in the lottery attended virtually instead through video communication feeds.[74] This year, two of the bottom three teams (Minnesota and Golden State) received the top two selections, while Charlotte and Chicago both jumped up into the top four. Teams that resumed their seasons remained at their initial positions set at the time, with Memphis moving down to the 14th selection after initially being set for a playoff spot.

^ 1: The first record was the team's record as of March 12, 2020. The second record includes the team's eight bubble games, which were not used in determining lottery placements.
^ 2: The Memphis Grizzlies' pick was conveyed to the Boston Celtics since their selection stayed at pick 14, outside of the top 4.

The draft is conducted under the eligibility rules established in the league's 2017 collective bargaining agreement (CBA) with its player's union. The previous CBA that ended the 2011 lockout instituted no immediate changes to the draft, but called for a committee of owners and players to discuss future changes.

Players who are not automatically eligible have to declare their eligibility for the draft by notifying the NBA offices in writing no later than at least 60 days before the event. For the 2020 draft, the date fell on April 26 at first, but the deadline was postponed indefinitely and moved to August 17. After that date, "early entry" players are able to attend NBA pre-draft camps and individual team workouts to show off their skills and obtain feedback regarding their draft positions. Under the CBA a player may withdraw his name from consideration from the draft at any time before the final declaration date, which is 10 days before. Under current NCAA rules, players have until 10 days after the draft combine to withdraw from the draft and retain college eligibility; however, due to COVID-19 disruptions, the NCAA announced that for the 2020 draft, the withdrawal deadline would be changed to 10 days after the combine or August 3, whichever came first.[77]

A player who has hired an agent retains his remaining college eligibility regardless of whether he is drafted after an evaluation from the NBA Undergraduate Advisory Committee. Underclassmen who declare for the NBA draft and are not selected have the opportunity to return to their school for at least another year only after terminating all agreements with their agents, who must have been certified no later than August 1, 2020.[78]

This year, 205 underclassed draft prospects (i.e., players with remaining college eligibility) had declared by the initial April 26 deadline, with 163 of these players being from college or were high school postgraduates.[79] The names left over mean they have hired an agent, or have announced that they plan to do so before the night of the draft. At the end of either the August 3 deadline (or the other one which was 10 days post-combine), 71 players declared their intentions to enter the draft with an agent, while 92 announced their return to college for at least one more season (or enter college in the case of Makur Maker). Additionally, one more academy postgraduate student managed to enter at the new underclassman deadline.[80] Furthermore, three different underclassmen that were confirmed at the time (Jermaine Bishop, Isiaha Mike, and Filip Petrušev) all signed overseas contracts in Europe while waiting for this year's draft to begin, though they still remained listed under their colleges they played for before beginning the draft process as opposed to the new teams and leagues they signed for;[81][82] Petrušev later withdrew from the draft on November 8, 2020 to stay with his new team, the Mega Soccerbet in Serbia, initially leaving the final number of underclassmen students entering the draft at 71 (69 excluding Bishop and Mike).[83] Finally, at the November 8 deadline, Tony Goodwin II also withdrew his name from the draft, but Nikolaos Okekuoyen (a Greek-Nigerian postgraduate student from Ridgeview Prep) was approved for the draft that day, leaving the number of players still at 71.[84]

International players that declared this year and did not previously declare in another prior year can drop out about 10 days before the 2020 draft, which was November 8 this year. By the initial April 26 deadline, 42 international prospects, including one from a Canadian CEGEP (Quebecer college), expressed interest in this draft.[79] By the end of the deadline set in August, seven of these players pulled their names out,[80] leaving only 35 prospects, later adding one more player from a Canadian preparatory academy who also entered at that deadline. With Sergi Martínez & Joel Parra also dropping out of the draft before the draft deadline concluded, but after the official announcement came out,[85] this officially brought the final number of underclassmen available down to 84 players instead of 86, with 23 international players exiting the draft by November this year instead of 21.[84]

Players who do not meet the criteria for "international" players are automatically eligible if they meet any of the following criteria:[86]

Players who meet the criteria for "international" players are automatically eligible if they meet any of the following criteria:[86]