The 2020 Democratic Party presidential primaries and caucuses were a series of electoral contests organized by the Democratic Party to select the 3,979[a] pledged delegates to the 2020 Democratic National Convention held on August 17–20 to determine the party's nominee for president of the United States in the 59th U.S. presidential election. The elections took place in all 50 U.S. states, the District of Columbia, five U.S. territories, and Democrats Abroad, and occurred between February 3 and August 11.

A total of 29 major candidates declared their candidacies for the primaries,[4] the largest field of presidential candidates for any American political party since 1972, exceeding the field of 17 major candidates in the 2016 Republican Party presidential primaries.[5] Former Vice President Joe Biden led polls throughout 2019, with the exception of a brief period in October when Senator Elizabeth Warren experienced a surge in support.[6] The formal beginning of the primary season was marred by controversy, as technical issues with vote reporting resulted in a three-day delay in vote counting in the Iowa caucus, as well as subsequent recounts. The certified results of the caucus eventually showed Mayor Pete Buttigieg winning the most delegates, while Senator Bernie Sanders won the popular vote in the state. Sanders then went on to win the New Hampshire primary in a narrow victory over Buttigieg before handily winning the Nevada caucus, cementing his status as the front-runner for the nomination.[7][8]

Biden, whose campaign fortunes had suffered as a result of poor performances in Iowa and New Hampshire, made a comeback by overwhelmingly winning the South Carolina primary, motivated by strong support from African-American voters, an endorsement from South Carolina Congressman Jim Clyburn, and Democratic establishment concerns about nominating Sanders.[9] Following Biden's victory in South Carolina, several candidates dropped out of the race and endorsed Biden in what was viewed as a consolidation of the party's moderate wing.[10] Biden then went on to win 10 out of 15 contests on Super Tuesday, beating back challenges from Sanders, Warren, and former New York City Mayor Michael Bloomberg, solidifying his lead.[10]

On April 8, Biden became the presumptive nominee after Sanders, the only other candidate remaining, withdrew from the race.[11] In early June, Biden passed the threshold of 1,991 delegates to win the nomination.[12][13] In total, seven candidates received pledged delegates: Biden, Sanders, Warren, Bloomberg, Buttigieg, Senator Amy Klobuchar and U.S. Representative Tulsi Gabbard.[14] On August 11, Biden announced that former presidential candidate Senator Kamala Harris would be his running mate.[15] Biden and Harris were officially nominated for president and vice president by delegates at the Democratic National Convention on August 18 and 19.[16][17] Biden and Harris went on to win the presidency and vice presidency in the general election on November 3, defeating the incumbents President Donald Trump and Vice President Mike Pence.

After Hillary Clinton's loss in the previous election, many felt the Democratic Party lacked a clear leading figure.[18] Divisions remained in the party following the 2016 primaries, which pitted Clinton against Bernie Sanders.[19][20] Between the 2016 election and the 2018 midterm elections, Senate Democrats generally shifted to the political left in relation to college tuition, healthcare, and immigration.[21][22] The 2018 elections saw the Democratic Party regain the House of Representatives for the first time in eight years, picking up seats in both urban and suburban districts.[23][24]

On August 25, 2018, the Democratic National Committee (DNC) members passed reforms to the Democratic Party's primary process in order to increase participation[25] and ensure transparency.[26] State parties are encouraged to use a government-run primary whenever available and increase the accessibility of their primary through same-day or automatic registration and same-day party switching. Caucuses are required to have absentee voting, or to otherwise allow those who cannot participate in person to be included.[25]

Independent of the results of the primaries and caucuses, the Democratic Party, from its group of party leaders and elected officials, also appointed 771[b] unpledged delegates (superdelegates) to participate in its national convention.

There were also a number of changes to the process of nomination at the state level. A decline in the number of caucuses occurred after 2016, with Democrats in Colorado, Hawaii, Idaho, Kansas, Maine, Minnesota, Nebraska, North Dakota, and Washington all switching from various forms of caucuses to primaries (with Hawaii, Kansas, and North Dakota switching to party-run "firehouse primaries"). This has resulted in the lowest number of caucuses in the Democratic Party's recent history, with only three states (Iowa, Nevada, and Wyoming) and four territories (American Samoa, Guam, Northern Marianas, and U.S. Virgin Islands) using them. In addition, six states were approved in 2019 by the DNC to use ranked-choice voting in the primaries: Alaska, Hawaii, Kansas, and Wyoming for all voters; Iowa and Nevada for absentee voters.[29] Rather than eliminating candidates until a single winner is chosen, voters' choices would be reallocated until all remaining candidates have at least 15%, the threshold to receive delegates to the convention.[30]

Several states which did not use paper ballots widely in 2016 and 2018, adopted them for the 2020 primary and general elections,[31] to minimize potential interference in vote tallies, a concern raised by intelligence officials,[32] election officials[33] and the public.[34] The move to paper ballots enabled audits to start where they had not been possible before, and in 2020 about half the states audit samples of primary ballots to measure accuracy of the reported results.[35] Audits of caucus results depend on party rules, and the Iowa Democratic party investigated inaccuracies in precinct reports, resolved enough to be sure the delegate allocations were correct, and decided it did not have authority or time to correct all errors.[36][37][38]

Rules for number of delegates

Number of pledged delegates per state

Six pledged delegates are assigned to each territory, 44 to Puerto Rico, and 12 to Democrats Abroad. Each jurisdiction can also earn bonus delegates by holding primaries after March or in clusters of 3 or more neighboring states.[39]

Within states, a quarter of pledged delegates are allocated to candidates based on statewide vote totals, and the rest based on votes in each Congressional District, though some states use divisions other than congressional districts. For example, Texas uses state Senate districts.[41][39] Districts which have voted Democratic in the past get more delegates, and fewer delegates are allocated for swing districts and Republican districts.[39] For example, House Speaker Pelosi's strongly Democratic district 12 has 7 delegates, or one per 109,000 people, and a swing district, CA-10, which became Democratic in 2018, has 4 delegates, or one per 190,000 people.[42][43][44]

Candidates who received under 15% of the votes in a state or district got no delegates from that area. Candidates who got 15% or more of the votes divided delegates in proportion to their votes.[42][45] These rules apply at the state level to state delegates and within each district for those delegates. The 15% threshold was established in 1992[46] to limit "fringe" candidates.[47] The threshold now means that any sector of the party (moderate, progressive, etc.) which produces many candidates, thus dividing supporters' votes, may win few delegates, even if it wins a majority of votes.[47][48][46]

Main article: Impact of the COVID-19 pandemic on politics § Impact on elections

Due to the COVID-19 pandemic in the United States, a number of presidential primaries were rescheduled. On April 27, New York cancelled its primary altogether on the grounds that there was only one candidate left with an active campaign. Andrew Yang responded with a lawsuit, arguing that the decision infringes on voting rights,[54] and in early May, the judge ruled in favor of Yang.[55]

Nearly 300 candidates who did not receive significant media coverage also filed with the Federal Election Commission to run for president in the primary.[86]

Withdrew during the primaries

Other notable individuals who were not major candidates terminated their campaigns during the primaries:

Withdrew before the primaries

Other notable individuals who were not major candidates terminated their campaigns before the primaries:

The DNC also announced that it would not partner with Fox News as a media sponsor for any debates.[202][203] Fox News had last held a Democratic debate in 2003.[204] All media sponsors selected to host a debate will as a new rule be required to appoint at least one female moderator for each debate, to ensure there will not be a gender-skewed treatment of the candidates and debate topics.[205]

The following graph depicts the standing of each candidate in the poll aggregators from December 2018 to April 2020.

Rep. John Delaney was the first major candidate to announce his campaign, two and a half years before the 2020 Iowa caucus.

Entrepreneur Andrew Yang was the second major Democratic candidate to announce his campaign. 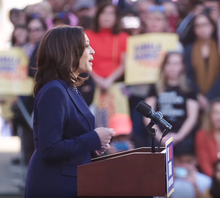 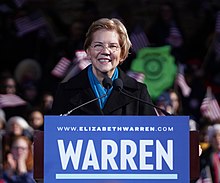 Governor Jay Inslee launched his presidential bid on March 1, 2019, becoming the first incumbent governor to do so.

In the weeks following the election of Donald Trump in the 2016 election, media speculation regarding potential candidates for the 2020 Democratic Party presidential primaries began to circulate. As the Senate began confirmation hearings for members of the cabinet, speculation centered on the prospects of the "hell-no caucus", six senators who went on to vote against the majority of Trump's nominees. According to Politico, the members of the "hell-no caucus" were Cory Booker, Kamala Harris, Kirsten Gillibrand, Bernie Sanders, Jeff Merkley, and Elizabeth Warren.[247][248] Other speculation centered on then-Vice-President Joe Biden making a third presidential bid following failed attempts in 1988 and 2008.[249]

The Democratic National Committee (DNC) made changes to the role of superdelegates, deciding to allow them to vote on the first ballot only if the nomination is uncontested.[252]

Democratic Party officials and television networks began discussions as to the nature and scheduling of the following year's debates and the nomination process.[253] 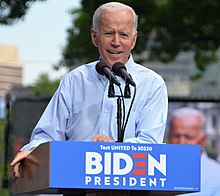 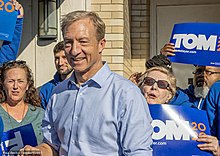 Governor Steve Bullock suspended his campaign and declined to run for the United States Senate on December 2, 2019. He later reversed his decision and challenged Senator Steve Daines after meeting with Barack Obama and Chuck Schumer.

Sen. Michael Bennet suspended his campaign on February 11, 2020, after the polls closed in the New Hampshire primary.

Former Governor Deval Patrick suspended his campaign on February 12, 2020, prior to the Nevada caucus.

indicates that the candidate was on the ballot for the primary contest,

indicates that the candidate was a recognized write-in candidate, and

indicates that the candidate did not appear on the ballot in that state's contest.

indicates that a candidate withdrew before the election but was still listed on the ballot.

Candidates listed in italics have suspended their campaigns.

The event became a virtual "Convention Across America" with voting held online before the opening gavel, and the non-televised events held remotely over ZOOM.

This is an overview of the money being raised and spent by each campaign for the entire period running from January 1, 2017, to March 31, 2020, as it was reported to the Federal Election Commission (FEC). Total raised is the sum of all individual contributions (large and small), loans from the candidate, and transfers from other campaign committees. The last column, Cash On Hand (COH), has been calculated by subtracting the "spent" amount from the "raised" amount, thereby showing the remaining cash each campaign had available for its future spending as of February 29, 2020.[update] As of February 29, 2020, the major candidates have raised $989,234,992.08.

Candidate who has withdrawn