Leader of the British Labour Party

Sir Keir Rodney Starmer KCB PC QC (born 2 September 1962) is a British politician serving as Leader of the Labour Party and Leader of the Opposition since 2020. He has been Member of Parliament for Holborn and St Pancras since 2015. Ideologically, he identifies as a socialist and has been described as being on the soft left.[1][2][3][4]

After qualifying for the bar, he acted exclusively as a defence lawyer specialising in human rights issues, before being appointed as a Queen's Counsel (QC) in 2002. In 2008, he became Director of Public Prosecutions (DPP) and Head of the Crown Prosecution Service (CPS), holding these roles until 2013. For his role as Director of Public Prosecutions, Starmer was appointed Knight Commander of the Order of the Bath (KCB) in the 2014 New Year Honours.

Elected to the House of Commons in the 2015 general election, Starmer was appointed to the Shadow Cabinet in October 2016 as Shadow Secretary of State for Exiting the European Union, after the vote to leave the European Union. Starmer was a vocal advocate for a second referendum, stating he would have voted to remain. After Labour's defeat in the 2019 general election, Starmer was elected to succeed Jeremy Corbyn as Leader of the Labour Party in April 2020.

Keir Rodney Starmer was born in Southwark, London, on 2 September 1962[5][6] and grew up in the small town of Oxted in Surrey.[7][8][9] He was one of four children of Josephine (née Baker), a nurse, and Rodney Starmer, a toolmaker.[9][10] His mother had Still's disease.[11][12] His parents were Labour Party supporters, and named him after the party's first parliamentary leader, Keir Hardie.[13] He passed the 11-plus examination and gained entry to Reigate Grammar School,[13] then a voluntary aided state school, although it converted to an independent fee-paying grammar school in 1976 while he was there.[14] In his teenage years Starmer was active in Labour politics, and was a member of the East Surrey Young Socialists.[10][9] He studied law at the University of Leeds, graduating with a first class Bachelor of Laws (LLB) degree in 1985.[15][16] He undertook postgraduate studies at St Edmund Hall, Oxford, graduating from the University of Oxford as a Bachelor of Civil Law (BCL) in 1986.[17][15]

Starmer became a barrister in 1987, at the Middle Temple, later becoming a bencher there in 2009.[5] He was a member of Doughty Street Chambers, primarily working on human rights issues.[11] He has been called to the bar in several Caribbean countries.[18] He notably worked for Helen Steel and David Morris in the McLibel case, which went to court in 1997. In an interview, he described the case as "very much a David and Goliath", and said that "there's an extremely good legal team acting for McDonald's at great expense and Dave and Helen have had to act for themselves with me as a sort of free back up whenever possible." He was interviewed for McLibel, the documentary about the case directed by Franny Armstrong and Ken Loach.[19]

He was appointed Queen's Counsel on 9 April 2002, aged 39.[20] In the same year, he became joint head of Doughty Street Chambers. Starmer also served as a human rights adviser to the Northern Ireland Policing Board and the Association of Chief Police Officers, and was also a member of the Foreign Office Death Penalty Advisory Panel from 2002 to 2008.[5] In 2007, he was named "QC of the Year" by the UK legal directory.[21]

In July 2008, Attorney General Baroness Scotland of Asthal named Starmer as the new Head of the Crown Prosecution Service and Director of Public Prosecutions; he took over from Ken Macdonald on 1 November 2008.[22] Macdonald, himself a former defence lawyer, publicly welcomed the appointment.[13]

In February 2009, Starmer approved a decision not to prosecute any police over the controversial shooting of Jean Charles de Menezes.[23]

In July 2010, Starmer announced the decision not to prosecute the police officer Simon Harwood in relation to the death of Ian Tomlinson; this led to accusations by Tomlinson's family of a police cover-up.[24] After a subsequent inquest found that Tomlinson had been unlawfully killed, Starmer announced that Harwood would be prosecuted for manslaughter. The officer was acquitted in July 2012, but dismissed from the police that September.[25][26][27]

In February 2012, Starmer announced that Energy Secretary Chris Huhne and his former wife, Vicky Pryce, would be prosecuted for perverting the course of justice. Huhne became the first Cabinet Minister in British history to be compelled to resign as a result of criminal proceedings.[28] Starmer had previously said in relation to the case that "[w]here there is sufficient evidence we do not shy away from prosecuting politicians".[29]

In the summer of 2012, journalist Nick Cohen published allegations that Starmer was personally responsible for allowing to proceed the prosecution of Paul Chambers in what became known as the "Twitter Joke Trial". Chambers’ conviction of sending a message "of a menacing character" was quashed after a third appeal. The CPS denied that Starmer was behind the decision, saying that it was the responsibility of a Crown Court and was out of Starmer's hands.[30]

Starmer left office in November 2013, and was replaced by Alison Saunders.[31][32] Later that month, the Labour Party announced that Starmer would lead an enquiry into changing the law to give further protection to victims in cases of rape and child abuse.[33] On 28 December, he said to BBC News: "Well, I'm back in private practice; I'm rather enjoying having some free time, and I'm considering a number of options".[34]

Starmer was selected in December 2014 to be the Labour Party's prospective parliamentary candidate for the safe Labour constituency of Holborn and St Pancras, following the decision of the sitting MP Frank Dobson to retire.[35] Starmer was elected at the 2015 general election with a majority of 17,048.[36] He was urged by a number of activists to stand to be leader of the Labour Party in the 2015 leadership election following the resignation of Ed Miliband, but he ruled this out, citing his relative lack of political experience.[37][38] During the campaign, Starmer supported Andy Burnham, who finished second to Jeremy Corbyn.[39]

Corbyn appointed Starmer to the shadow Home Office ministerial team as Shadow Minister of State for Immigration, a role from which Starmer resigned in 2016 in protest at Corbyn's leadership, along with numerous other Labour MPs,[40][41] arguing that it was "simply untenable now to suggest we can offer an effective opposition without a change of leader".[42]

Following Corbyn's re-election as leader in September 2016, Starmer accepted an appointment as shadow Brexit secretary, replacing Emily Thornberry in this role.[43] On taking up the role, Starmer resigned from a consultancy position with the law firm specialising in human rights, Mishcon de Reya LLP, that had acted for Gina Miller in bringing legal proceedings against the Government.[44]

In his role as shadow Brexit secretary, Starmer questioned the Government's "destination" for the UK outside of the European Union, as well as calling for Brexit plans to be made public. On 6 December 2016, Prime Minister Theresa May confirmed the publication of such plans, in what some considered a victory for Starmer.[45] He has argued that the Government would be subject to a race against time to pass a large number of new laws, or risk an "unsustainable legal vacuum", if Britain left the EU without a deal.[46] On 25 September 2018, Starmer declared to the Labour Party Conference in Liverpool that "campaigning [by the party] for a public vote must be an option".[47]

Starmer has called for a reform to the EU free movement rules following Brexit and for a "fundamental rethink of immigration rules from start to finish".[48] In his first interview after being appointed to the Shadow Cabinet, Starmer argued that immigration was too high and called for it to be reduced as Britain leaves the EU, despite Corbyn ruling out any cap.[49] Starmer told Politico in November 2016 that negotiations with the EU should start on the understanding that there must be "some change" to freedom of movement rules, given that remaining in the EU single market is no longer a reality.[50]

In May 2017, Starmer said that "free movement has to go", but that it was important to retain "free movement of labour", given the importance of immigration for the UK's economy.[51] Starmer was a supporter of a second referendum on Brexit,[52] with this position becoming Labour Party policy in their 2019 general election manifesto.[53]

Leadership of the Labour Party 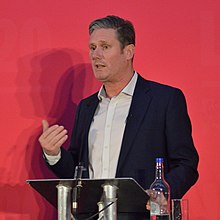 Starmer speaking at a leadership hustings in Bristol

Following Labour's heavy defeat in the 2019 general election, Jeremy Corbyn announced that he would stand down as Leader of the Labour Party. Starmer announced his candidacy in the ensuing leadership election on 4 January 2020, winning multiple endorsements from MPs as well as from the trade union Unison.[54] He went on to win the leadership contest on 4 April 2020, beating rivals Rebecca Long-Bailey and Lisa Nandy, with 56.2% of the vote in the first round,[55] and therefore also became Leader of the Opposition.[56] He appointed his Shadow Cabinet the following day, which included former leader Ed Miliband, as well as both of the candidates he defeated in the leadership contest. He also appointed Anneliese Dodds as Shadow Chancellor of the Exchequer, making her the first woman to serve in that position in either a ministerial or shadow ministerial position.[57]

Starmer has been described as 'soft left'.[2][3][4] He supports social ownership and investment in the UK's public services, including the NHS, as well as the abolition of university tuition fees.[58][59][60] He has called for an increase in income tax for the top 5% of earners and an end to tax avoidance by corporations.[58] He advocates the reversal of the Conservative Party's cuts in corporation tax and supported Labour's anti-austerity proposals under Jeremy Corbyn's leadership.[58][59] On social inequality, Starmer proposes "national wellbeing indicators" to measure the country's performance on health, inequality, homelessness, and the environment.[61] He has called for an "overhaul" of the UK's Universal Credit scheme.[62]

Starmer has advocated for an end to "illegal wars" and a review of the United Kingdom's arms sales.[58] During his leadership campaign, he pledged to create a "Prevention of Military Intervention Act", which would only permit lawful military action with the support of the House of Commons.[63][64] Starmer stated in 2015 that he believed that the Iraq War was "not lawful under international law because there was no UN resolution expressly authorising it."[65]

Starmer married Victoria Alexander, a solicitor, in 2007. The couple's son and daughter are being brought up in the Jewish faith of their mother and the family attend shabbat dinners.[12][66] Starmer is a keen footballer, and supports Arsenal football club.[9]

Starmer is the author and editor of several books about criminal law and human rights:[5]