The Allegheny Front is the major southeast- or east-facing escarpment in the Allegheny Mountains in southern Pennsylvania, western Maryland, and eastern West Virginia, USA. The Allegheny Front forms the boundary between the Ridge-and-Valley Appalachians to its east and the Appalachian Plateau (locally called the Allegheny Plateau) to its west. The Front is closely associated with the Appalachian Mountains' Eastern Continental Divide, which in this area divides the waters of the Ohio/Mississippi river system, flowing to the Gulf of Mexico, from rivers flowing into Chesapeake Bay and from there into the Atlantic Ocean.

However, the Front and the Divide do not always coincide; for example, the North Branch of the Potomac River begins well west of the Allegheny Front, at the Fairfax Stone near the southwestern tip of Maryland, and only about 10 miles (16 km) and across the actual divide from the headwaters of the Youghiogheny River draining westwards into the Monongahela and Ohio rivers.

The Allegheny Front is one of the windiest spots east of the Mississippi, leading to the recent establishment of wind farming there.

The Allegheny Front forms part of the Appalachian Structural Front, separating the Appalachian Plateau from the Appalachians' Ridge and Valley Province.[1] The various other escarpments along this structural feature include the Catskill Escarpment to the northeast and the Cumberland Escarpment to the southwest.[1] The Allegheny Front itself extends for about 180 miles (290 km) southwesterly from south-central Pennsylvania through western Maryland, then divides the eastern panhandle of West Virginia from the rest of that state.

The name "Allegheny Front" is applied to the escarpment throughout much of its extent, although it is little used in Maryland.

The highest part of the crest of the Allegheny Front is also its southernmost high point, Mount Porte Crayon at 4,770 feet (1,450 m), on the Pendleton/Randolph county line in West Virginia. Its lowest point, 790 feet (240 m), is along the North Branch of the Potomac River near Keyser, West Virginia.[2] Other high points along the Front include the Dolly Sods area in West Virginia, a broad, rocky plateau at an elevation of about 4,000 feet (1,200 m); Dan's Rock on Dans Mountain in Maryland at 2,895 feet (882 m); and Blue Knob in northern Bedford County, Pennsylvania, with an elevation greater than 3,120 feet (950 m). 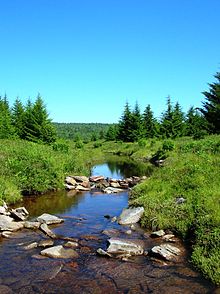 Red Creek west of the crest of the Allegheny Front in the Dolly Sods area of West Virginia; the creek originates along the Eastern Continental Divide, with its waters flowing to the Gulf of Mexico as part of the Ohio River watershed. 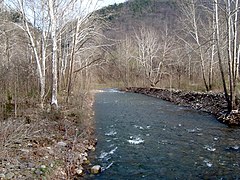 Seneca Creek, incised into the Allegheny Front west of Seneca Rocks, West Virginia. This short but steep creek originates along the Eastern Continental Divide; its waters flow into the Atlantic Ocean via the Potomac River and Chesapeake Bay.

Local segments of the Eastern Continental Divide usually pass within a few miles of the Allegheny Front, and in many places coincide with it; this divide between waters of the Atlantic Ocean and the Gulf of Mexico separates the westward-flowing Ohio River watershed from the eastward-flowing watersheds of the Susquehanna, Potomac, and James rivers. A number of eastward-flowing creeks and rivers have their headwaters incised into Allegheny Front, displacing the Divide westward from the Front, including the North Branch of the Potomac River west of Cumberland, Maryland, which originates well into the Appalachian Plateau at the Fairfax Stone, just south of Maryland's southwestern tip. No waterway crosses the Front from east to west. 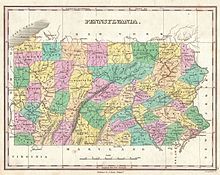 The Allegheny Front begins in central Pennsylvania just northwest of the town of Lock Haven and extends southwest paralleling, first, Bald Eagle Mountain, and then Brush Mountain to its east. The Front continues to a point a little north of the Pennsylvania/Maryland boundary where it is offset about 10 miles (16 km) to the east as it changes from the bold escarpment that characterized it west of Altoona to its more gentle rise in Maryland.

Across the Mason–Dixon line in Maryland, the Front becomes Dans Mountain, west of Cumberland, which reaches 2,895 feet (882 m) in elevation at Dan's Rock. Along Maryland's southern border, the North Branch of the Potomac River cuts down through the Front at 790 feet (240 m) just west of Keyser, West Virginia.

South of the Potomac, in West Virginia, the Front continues through the Mount Storm area, then passes along the eastern edge of Dolly Sods, a wide plateau of Pottsville conglomerate bedrock at about 4,000 feet (1,200 m) elevation. From the Sods, the front continues southward as an increasingly steep escarpment west of the North Fork of the South Branch of the Potomac River, with the Roaring Plains continuing the high plateaus of the Dolly Sods area along the escarpment's crest. The Allegheny Front's southern end is Mount Porte Crayon (4,770 ft or 1,450 m), after which the land drops steeply to Seneca Creek, west of Seneca Rocks.[4]

South of Mount Porte Crayon and Seneca Creek, the Appalachian Structural Front is less clearly unified. Pottsville-capped Spruce Mountain, south and east of Seneca Creek, continues the Allegheny Front's geology southward;[5] this ridge reaches an elevation of 4,863 feet (1,482 m) at Spruce Knob, West Virginia's highest point. Similarly steep escarpments sharing much of the same geologic structure are also present nearby along the eastern slopes of Allegheny Mountain and Back Allegheny Mountain (along with the southern end of Shavers Mountain), but these mountains lack the Pottsville caps characteristic of the Allegheny Front.[5] Allegheny Mountain's long, nearly level crest is generally about 4,000 to 4,200 feet (1,200 to 1,300 m) in elevation, with Paddy Knob reaching 4,477 feet (1,365 m). High points on Back Allegheny Mountain and adjacent Shavers Mountain include Gaudineer Knob (4,432 ft or 1,351 m) and Bald Knob (4,842 ft or 1,476 m); these two mountains form a part of the divide between the Monongahela River and New River portions of the Ohio River watershed.

See also: Geology of the Appalachians

Most of the Allegheny Front is capped by a nearly horizontal, erosion-resistant stratum (rock layer) of white Pottsville conglomerate, sometimes where flat with younger Carboniferous strata on top.[5] The silica-cemented gravel-containing Pottsville rock formed as part of a vast delta in the Pennsylvanian geologic period.[6]

The region was then uplifted and folded during the Alleghenian Orogeny about 320-250 million years ago, during the Carboniferous[7] and Permian geological periods, forming the modern Appalachian Mountains as the ancient continents of North America and Africa collided due to plate tectonics processes.[6]

Subsequent erosion (for more than 200,000,000 years) has prefentially removed various softer surrounding rocks, especially the easily dissolved Greenbrier limestone, leaving areas of the hard Pottsville conglomerate as a caprock protecting softer rock strata immediately beneath. The Pottsville bedrock outcrops conspicuously in various more exposed areas along the Front's eastern edge. Many of these clifftops offer broad scenic views, unlike most mountaintops within the generally forested Appalachians, and the more readily accessible are popular tourist destinations, including Dan's Rock on Dans Mountain in Maryland and the Dolly Sods and an overlook along U.S. Route 50 in West Virginia.

Since the eastern side of the Front is drained by Chesapeake Bay rivers that drop fairly rapidly through the Ridge and Valley Province to the low-elevation waters of the Great Appalachian Valley, erosion on the eastern slope of this caprock layer has been much more intense than on the western slope, where drainage to low elevations is spread over a greater distance (particularly considering stream meanders) through the Appalachian Plateau to the Ohio River. These contrasting patterns of erosion produce a steep escarpment along much of the Front's eastern edge, with the mountains west of the Front generally grading more gently into the Appalachian Plateau. 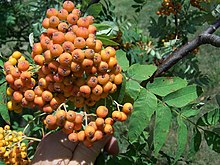 The nearly continuous high elevation and clifftop bedrock exposures of the Allegheny Front provide an important corridor of upland habitat in the central Appalachian Mountains.

During the fall, the Allegheny Front is associated with an important flyway for migratory birds traveling from their northern breeding grounds to their southern wintering sites. In good weather, the birds can be seen from late morning, when they take advantage of the thermals — rising pockets of warm air — to facilitate flying, until the thermals cease in late afternoon.[8]

Among the bird-banding stations and migratory bird observatories associated with this flyway are:

In the Dolly Sods area of West Virginia, and southward toward Mount Porte Crayon, the Front is topped for more than 10 miles (16 km) by a broad, nearly flat plateau with many wide areas of exposed bedrock along the edge of the escarpment's 2,800-to-3,200-foot (850 to 980 m) drop[10] to the North Fork River to the east, along the Front's base. Many of these windswept cliff-edge outcrops are sparsely vegetated, with occasional one-sided (flagged) red spruce (Picea rubens) trees, and open habitats dominated by various low-growing Appalachian and boreal plant species.[11]

View of Saddle Mountain at sunrise from Skyline atop the Allegheny Front along U.S. 50 in West Virginia 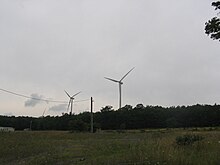 The long, steep, nearly continuous, often windswept escarpment of the Allegheny Front has both positive and negative effects on society and culture in the central Appalachians region.

Challenge to transportation and communication

Few roads or railroads cross the Allegheny Front, limiting transportation and communication between the regions to its east and west. Establishing passage of the Front was key to the development of the U.S. railroad network during the second half of the 19th century, thereby connecting the Midwest by rail with the Atlantic seaboard. The Pennsylvania Railroad built the Horseshoe Curve track section west of Altoona, so that freight trains could ascend and descend to or from the Allegheny Plateau to the west.

Substantial portions of the Allegheny Front's crest and slopes are parts of a national forest (the Monongahela in West Virginia) or various state, local, or private wildlands parks or preserves.

The NedPower Mount Storm Wind Project in West Virginia includes 132 wind turbines along 12 miles (19 km) of the Allegheny Front in Grant County near Mount Storm. Constructed between 2006 and 2008, it generates up to 264 megawatts of electricity for the mid-Atlantic power grid, enough to service about 66,000 homes and businesses.

In December 2016, Save Our Allegheny Ridges, a group that opposes energy development on forested mountaintops, said in a news release that Invenergy plans to install a series of wind turbines atop Shaffer Mountain in Somerset County just a few miles north of the Allegheny Front Hawk Watch.[12]